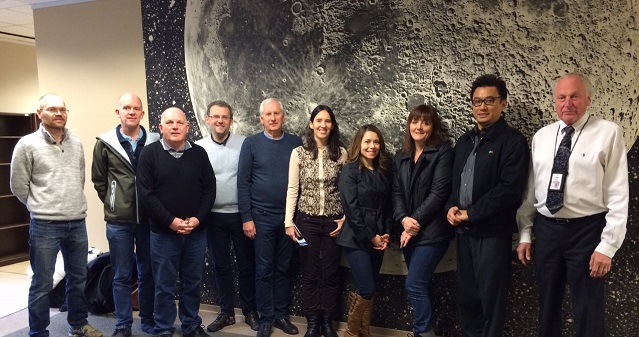 Today we started the day visiting the Division of Space Life Sciences of USRA, the Universities Space Research Association where the director, Dr. Neal R. Pellis, showed us around the institute and gave us a presentation on cells and space. Check out the following resources from his centre:

And if he shares his slides with us, I will upload them here in the future.

Then we met Pete Hasbrook, Associate Program Scientist, International Space Station (ISS) Program at NASA, specializing in international collaboration. He worked on the assembly of the ISS and now with ISS International Partners to develop and implement multilateral plans, and to report accomplishments and results from ISS utilization.

Overall, the Program Science Office coordinates between the ISS Program and scientific discipline working groups, to optimize the selection and execution of research on the ISS. This includes identifying opportunities, synergies, and issues to working group leadership as well as ISS Program leadership. Basically, understand the science, help prioritize, help others understand the data so it can be used, track publications on the topic, etc.

Pete Hasbrook told us about the International Space Station Research Benefits in the area of Discovery, Earth Benefits and Space Exploration. And they have a new area: commercialization of space! When will the 1st hotel be available in space?

So, did you know the ISS goes around the Earth every 90′? See for example Around the World in 90 Minutes with Astronaut Reid Wiseman. Or that most modules did not see each other until they met in space? Or that the ISS is ~108 m by ~73 meters (slightly larger then a full sized soccer field)? Oh, and it seems there are two toilets on the ISS… Learn more about the ISS here or check out their Space Station Researcher Explorer App.

The morning finished with a talk from George Abbey, former director of the Johnson Space Center (JSC), NASA’s center for human spaceflight training, research, and flight control. The talk was on how the Apollo programme almost didn’t take place and the race to get to space first between Russia and the US (since then, it’s only because of the collaboration between US, Russia, Europe and Japan, that we have such a cool space programme on Earth).

He then told us of this video of the 1st time the Moon was seen from space and of the Apollo’s 8 launch. It seems, the Apollo 8 Saturn V spacecraft was the first to go to and orbit the moon and it was commanded by Frank Borman with Frank Borman, Jim Lovell and Bill Anders, as crew. And yes, Jim Lovell was later on the commander of Apollo 13, the one which had so many problems. See this video with real footage from Apollo 13’s ordeal! And for those that have seen the Hollywood Apolo 13 film, Mr Abbey told us of a few inconsistencies like that Ken Mattingly, the astronaut that was replaced as he was not immune to rubella, was not so unhappy at being replaced as shown in the film (and Mr Abbot knows, he was sitting with George Abbey when the explosion at the Apolo 13 took place!) and the crew was not unhappy with John L. Swigert, the replacement astronaut. And more importantly, the main people that made decisions for real were not in the film…

In the afternoon we visited Rocket Park as mentioned and then got to visit the Space Vehicle Mock-up Facility (SVMF)  where they have full size mock-ups of the International Space Station. Lucia McCullough, who we had met on the 1st day, walked us through the different modules (including ESA’s Columbus module).

Finally, we got to see Mission Control, both the one they used for the Apolo Missions and the one presently used. The crew on board the ISS was asleep so the room was quiet calm, but it was a privilege to see the people at the Control Room keeping an eye on them. We were given the tour by two ex-flight directors: Annette P. Hasbrook and Joel R. Montalbano. They told us how stressful but amazing jobs they had as flight directors and how everyone at Mission Control must have a degree in either Engineering, Physics or Maths (important that your students know!), except the medical staff of course, that are MDs. Today’s thought for you and your students: do you know who is the director of the JSC now?. Talk about impressive role models! Scientix made it to the ISS 🙂

wish we could bring you here!