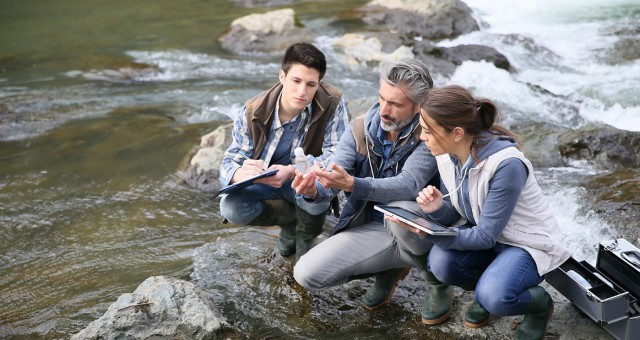 For those who nostalgically recall childhood and days when they got their first PC, I am going to tell the story of an idea which was done as a school project by my students…

One day,  while watching a screen saver that showed a flock of fish, I told my pupils that I would like to have a real aquarium in the screen. How would that be possible, they asked. Easily, I said, as we just needed to find an old PC monitor and replace the screen glass with a water tank. That would also be a challenge for all of us to explore the biological and chemical aspects of dealing with living conditions in aquariums.

After the first brainstorming and after dividing pupils into working groups, we soon collected many interesting pieces of information from the Internet, such as the epochal discovery in aquatics history where scientists found out water plants give oxygen to fish to breathe (Joseph Priestley, 1774) and that the first aquariums originated in China 3000 years ago… It is believed that goldfish were introduced from east Asia to Portugal in 1611 and from there to other parts of Europe… Some student groups explored theories concerning the construction of a water tank which would enable our goldfish survival in a small computer monitor’s water tank. An aquarium in your PC

Water hardness measures dissolved mineral content in water. There are two types of water hardness which should match the natural habitat of our fish:  General hardness (GH)  and Carbonate hardness (CA).

General hardness (GH) relates to the ratio of carbonate and non-carbonate hardness. It is mostly determinated by the amount of calcium (Ca++) and magnesium (Mg++) salts. It is expressed by the content of calcium carbonate (CaCO3) and it is measured in degrees of hardness (DH). Mark ppm indicates the amount „per million“, which is the equivalent for mg/Liter of water. 1 DH equalls to 17.8 ppm of CaCO3,  easier to understand according to the following table:

Water plants and other tips

A planted fish tank brings a true look of an aquatic environment. Plants require some special help to keep them alive, but they will contribute to a realistic ecosystem as carbon dioxide is transformed into oxygen just like with trees. A few great tips for keeping plants alive are as it follows:

Attention needs to be given to the location of the aquarium, too. This should be done before setting it. When choosing the best place, it is best to keep the following points in mind:

And some more tips…

How we constructed the aquarium step by step The whole class was overwhelmed with great excitement when the work was brought to the end, and we could hardly wait the moment when we put our fish into the tank. Everything worked perfectly after the fish came. We were very happy to see them alive for a long time after they got used to their new home.