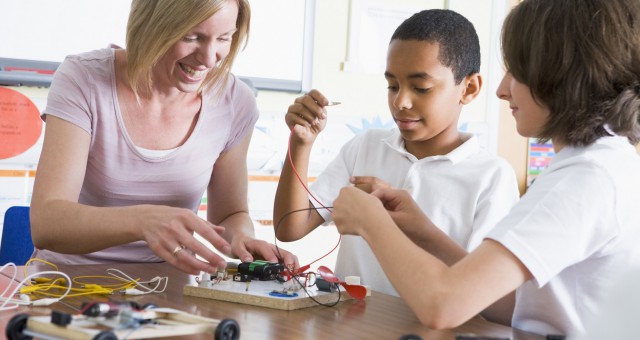 I live in Bosnia and Herzegovina, a country that has recently been hit by war. This war, despite the huge casualties on all sides, caused divisions that are still visible. They are based on religious and ethnic grounds. This is mostly noticeable in the education system which is one of the most complicated in Europe: there are three curricula (Bosnian, Serbian and Croatian) upon which are children in the schools divided. But that’s a story for another time.

Furthermore, my country last year was hit by devastating floods and landslides; many families lost their homes and many schools were devastated to such an extent that they had to be closed until new ones were built.

But here I will not talk about sad things, but will instead focus on something nice and constructive that has happened over the last year.

From the eTwinning ambassador of Slovenia Ms. Tatjana Gulić during Scientix conference in Brussels, I became familiar with the eTwinning project Chain Reaction. The project aims to connect children internationally through the development and competition of chain reactions. I liked idea very much because I saw the possibility of using an international project with the goal of trying to overcome the ethnic hatred in my country.

The time had come for the planning of a project that was the first of its kind in Bosnia and Herzegovina. The children were informed by their teachers about the project and came to the first meeting between two shifts. I explained to them what kind of project this was, what they needed to do, how to plan and then I let them express their ideas for a few minutes and think about what could be a possible problem in the realization of the project.

After brainstorming the children were immediately pointed to one important problem – meetings were difficult as many of the pupils were also attending primary music school which clashed with the meetings. I asked them if there was a way to overcome this problem and they suggested to create a Facebook group ‘Chain Reaction Zepce’ through which would they could coordinate and express their ideas. So that’s what we did and the project could begin. The children were devising how they wanted to start a reaction and how to end it, what would be at the center of the reaction, which materials were needed, what they wanted to show, how to use the knowledge of physics, chemistry, mathematics, computer science, technical education, geography, etc.

Throughout this interaction I stood aside and responded only to practical questions: “Teacher, do we have two levers/electric motors/switches/ramps/weights?”. The students alone negotiated the usage of the knowledge in the subjects that I had previously taught them. They also made arrangements for assembling reactions so that the students were in charge of maintaining order, for making materials for different parts of the reaction, recording, assembly, composing background music, editing the video, etc.All this was accompanied by a lot of questions after my hours, I stayed long afterwards answering questions of whether something was possible or not, in the hallways students would stop me with questions of what the physics classroom holds and whether someone already booked pieces of apparatus for experiments.

The day had come for the recording. An additional problem arose: our school was crowded (we have 1350 students in two shifts and insufficient classrooms which are consistently busy during both shifts). I had one classroom for one hour to compose and record the reaction. This is when I panicked because I knew that many things can go wrong. I decided to leave it to my students and to rely on their organization, which at the time was unclear to me. Surprisingly, their system worked very well: the students who were responsible for the order were doing their job, those who were in charge of different parts of reactions were doing theirs and upon their request other students brought materials, those who were responsible for recording where looking for the best angles and lighting and so on.

The reaction started with the elephant moving down the slope using stable balance (the idea and making of the elephant as well as the slope all came from one student) and continued so that the elephant crashes and triggers a switch that closes the circuit with an electric motor. The motor itself is connected by a rope with the lever system which undermined the books, which in turn triggered a ball down the slope that fell on the switch which lights a sign “the end”.

After a successful recording of the reaction it was time to complete the video and record the music for it. I prepared a survey and published it in the Twin space. The children were then responsible for voting: I published all videos in the Facebook group and I had the children’s voting results sent. With anticipation we awaited the results: our country was in 18th place. The children were happy but did notice the mistakes they made – specific parts of the reaction were not zoom in on enough and were not sufficiently visible. But that did not discourage the students – they learned something new.

My participation in this project has brought me a lot of satisfaction: I saw that the children can apply their knowledge in physics, mathematics, computer science, technical education, to exchange ideas, learn from each other, to socialize, be with each other no matter what nationality and religion they are, to make friends, and to begin to take more interest in STEM subjects.