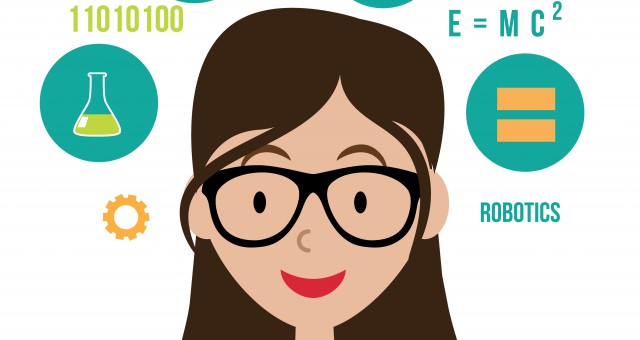 Since many years ago, we know there is a remarkable slope concerning the interests in STEM-subjects between girls and boys. Several studies, like the last OECD education study, showed that only 1 in 20 girls are willing to work in a typical STEM job, whereas 4 out of 20 boys dream of being an engineer, an IT specialist, a physics or another STEM specialist. If you ask those students who achieved the A-levels which is the subject the would like to study, you will find only 14% of young women but 39% of young men who prefer to study at a technical university or to study a STEM related subject. Often, young women -especially in Germany- argue that a main reason for this is that men earn much more money, even if they do the same job than a woman.

These facts make us teachers upset and lead us to engage in politics in order to get a chance to change the situation. But this should not be the only way to exert some kind of influence. We should start to break with typical traditions in kinder-gardens and schools. The most important task being the change of traditional and stereotypical role models and attitudes in order to start crossing boundaries. Encouraging girls to believe in their own abilities seems to be one key for success.

The Ada-Lovelace-project, founded in 1997 has been focused on special mentoring programs for pupils and  STEM apprentices. Over 1000 female scientists and STEM professionals, accompanied, encouraged and advised young women during their school and university years.

Besides this, the Ada-Lovelace-project organizes summer academies and camps during the holidays. For the younger ones, they search for industrial partners, who show them opportunities to work in a factory or in a laboratory during the “Girls’ day”. In Germany, this day takes place every April and it is supported by the Ministry of Education. Girls don’t have to go to school during that day; if they find a factory that opens the doors for them on that specific day, they will be able to make their own experiences in a typical STEM-job.

According to a leading German scholar, Prof. Dr. Markus Prechtl, this is not enough to change behavioral patterns on the long run. Encouraged by several studies, he believes that we must change much more: Besides focusing on curricula, we should think about feedback-culture to influence girls’ attitudes.

In fact, girls often believe that internal factors, like missing abilities, are responsible for their failures, whereas boys are much more confident. That is the reason why they believe that mostly external factors like the high degree of difficulty of the question, lead to the failure. According to that, Prechtl suggests to change our feedback-culture in lessons. Girls need encouraging and constructive feedback to change their beliefs. In this context, and as a matter of example, Prechtl suggests to choose sensitive phrases, when giving feedback. An example:

If a girl failed in a chemistry test, you shouldn’t say:

“It doesn’t matter. You shouldn’t be sad. You will write a good test in French or English class.”

“If you read the information about … once again, you will understand the process, I’m sure. You have great abilities!”

And if a girl has been successful, it is also important to give her a useful feedback:

“Your ideas are great! You convinced me.”

Try to avoid feedback which concentrates on external factors, such as:

“Look, you read and studied a lot. You should be lucky that the teacher put emphasis on this topic in the test.”

I personally think we should keep this in mind. It is really important to show girls that they are on the right way to  be a good scientist or just to keep their interest in STEM.

Another efficient way to include much more of girls’ ideas in lessons could be to take a look at their specific ways of learning. Prechtl analysed how students describe their hands-on assignments. He asked students to explain what they had been doing during a specific laboratory experiment by writing a photo story about it. In his opinion,  with this method, teachers can gain a good understanding of how pupils reflect on their own work. The results were that the photo stories done by girls were very much focused on how they had accomplished their target. In contrast, boys concentrated on the results. According to Prechtl, this could be a successful method to compare the results of both boys and girls in order to discuss it with pupils. This will also strengthen girls’ interests and will increase their constructive activities during science lessons.

A third way, which could be a solution to involve girls more frequently in discussions, is to use more models and illustrative material in order to improve and to train the abstract imagination. It can be combined with open and cooperative phases, which often make girls engage easier than traditional forms of learning.

Summing up, these aspects show us there are a lot of chances to “move minds” and to “cross boundaries”. Now further studies should be planed and conducted to give us teachers more hints, how to inspire more girls for STEM. I’m sure that this will be more effective than calls for competitions with the objective of promotion of girls, because these reach only the best ones. But our target should be to win many girls to increase the amount of female STEM-students and apprentices.