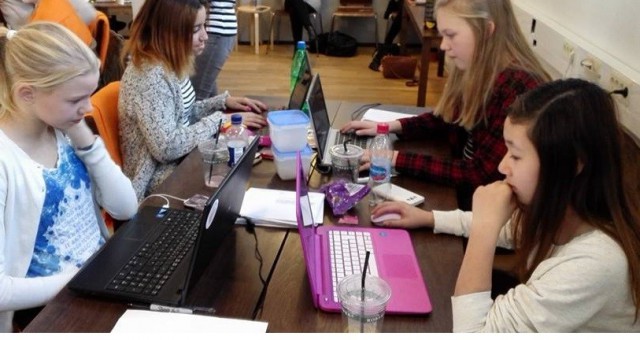 The year after Kodukup my four pupils, age 13, participated in Code Camp for girls that took place in Helsinki in October 2015. The camp was organized by Frantic, a digital agency providing high technology services. Week long day camp was all about learning the basics of coding in a fun way and it was offered for girls in upper secondary school (13-16 year old). They were learning HTML – and CSS – languages and creating their own web pages. “We had 19 applicants altogether, and we took all of them in. ICT industry and coding is still not as popular among women as it could be. This is a result of many different things, but one of them is stereotypes and wrong or insufficient perceptions of what the industry is like”, explains Jenny Salmimäki, Frantic’s Marketing coordinator. “We want to break those stereotypes and show what the industry can offer and hopefully make some girls even consider this as a career choice”, adds Sanna Nygård, Frantic’s Front-end developer.

According the research, (Käyttämätön mahdollisuus, girls and ICT, Susanna Bairoh, 2010) there is a great gap between using the technology and knowledge of ICT career. Girls use computers and technology on daily basis, but only very few are interested in studying ICT.  They are also unfamiliar with the possibilities that an ICT-career could offer. They don’t picture the career as very creative or social. In order to get girls interested, we need long term systematic actions starting from the primary school. Otherwise, girls might not choose ICT-career as interesting and a possible career choice for them.  What also needs to be taken into consideration is that teachers’ knowledge of the ICT-field is sometimes limited and they are not always aware of the requirements and content of an ICT-career. Most of the teachers see ICT as the future field, but some think it should not be considered as special.

Girls need role models and a social network. They might also lack self esteem when it comes to the abilities, which they think matter in an ICT career and therefore they believe ICT is too difficult for them. They are also depended on their friends opinions when choosing their studies. To get girls more interested it might be a better idea to create an only girls group and that’s the reason why Frantic decided to organize the code camp only for girls. They want to show that there is a need for girls and girls are respected. ICT is not too difficult and it’s also about team work and being social.

“That is the idea we want to give girls. And hopefully they can spread that message onwards to their friends as well”, Salmimäki continues.

During the camp girls were able to meet and talk with Tuuti Piippo. She is a journalist and author of the book “Futuremakers”. The book tells about women around the world sharing their story how they succeeded in the field of technology. Tuuti Piippo herself coded her first webpages at the age of 11.

“This camp has been great. We have learnt to use HTML-language and make CSS-buttons. I am creating a webpage about my life. I also added my attendance on Kodukup last year. That was the highlight of that year” says Saimi.

“We haven’t been learning coding yet in our school. We will later on. But during our free time we have been creating new games with Kodu program. Now in upper secondary school we are all in a same class, so we are still good friends and interested in coding” smile Anh, Rita and Jenna together.