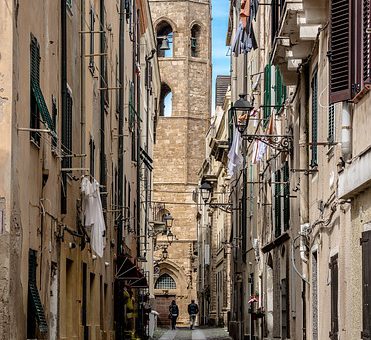 The project originates from the observation that most of the time, urban spaces are designed and built without analyzing the needs of new generations. This probably happens because the culture of listening and interpretation is lacking in students and they are not directly involved in the conception/transformation of urban spaces. This has two disadvantages:

1. the spaces are often inadequate to the needs of the younger population,

2. the city designers cannot make use of the contribution of the same students

From all these reasons comes the idea that the student is at the same time the creator and user of a shared space and therefore he becomes a participant in the re-invention of urban spaces. The workshop was held for a group of students at Liceo Scientifico Enrico Fermi in Alghero, Sardinia, Italy.

In relation to this scenario, the project objective has been identified in providing the students a conscience, a will and a technique of intervention (creation and modification) of the spatial and symbolic elements related to the places of one’s own city/neighborhood. The goal was to make them interested in becoming participants and protagonists of their citizenship.

The process entailed the following phases:

3. hypothesis of physical-symbolic modification of spaces and places,

4. public comparison on the feasibility and usefulness of the proposed changes.

Apart from the general ones (psychological and educational) related to the development of individual students, the activity has foreseen three hypotheses of physical-symbolic modification of no less than three urban spaces (nine software models and physical models made with a 3D printer), accompanied by an illustrative report of the modification processes implemented, of the purposes of these changes, all supported by an interactive map for smartphones as a dissemination tool.

Besides the previously mentioned aims, it was equally important to provide students of urban spaces the opportunity to meet bottom-up projects. A model, which represents the modern frontier of the processes of ownership of citizenship rights as a whole in participatory democracies.

These consisted of two types:

1. Intangible outputs: the project involves the production of two reports: Report on the state of the places and on the needs of young users and Report on the hypothesis of modification/improvement of the places as objects of study. These reports helped define and quantify the level of participation of students.

2. Output materials: there were in fact three: the software elaborations of the changes/reinventions of places (physical characteristics, functions, symbolic meaning); the plastic models produced by 3D printers, and the production of a geo-localized map of the city that can be used intuitively via smartphones, for dissemination and sharing of the results achieved during laboratory activities. The project has been constructed in such a way that it guarantees the growth awareness and citizenship in students. What is more, it taught students responsibility, organization and respect for deadlines and deliveries and has proven to be a excellent tool for orientation to new professions.

Already in the phase of selection of the places involved in the project, students have been reflecting on the value of public space, understood as a place of growth, collaboration, solidarity and plurality. Furthermore, during the elaboration of the project ideas, the students were given the opportunity to experiment with their own abilities to identify the needs of citizens (including and starting from themselves).

The students, in short, have had the experience of designing parts of their urban environment starting from recognized and shared needs, an experience that has been revealed certainly very formative, both on the technical methodological side and on the purely human side.