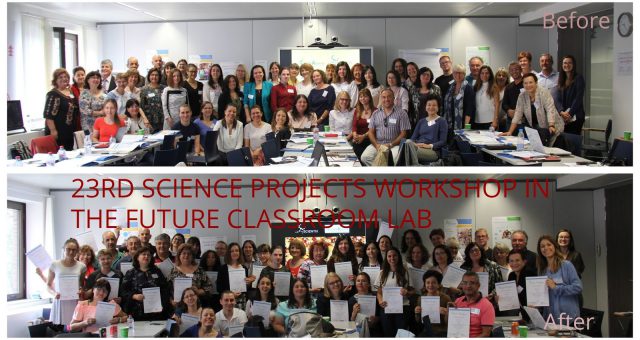 The award ceremony for the Scientix & STEM Alliance contests that took place for the winners of the STEM Discovery Week (23-27 April) was organized during the weekend of 22-24 Jun 2018. Among others, a total of 47 teachers representing their schools attended the event. There were 31 award winners from the Scientix contest, 12 STEM Alliance ones and 3 Scientix Ambassadors.

The event took place in Brussels at the European Schoolnet offices. All the winners had the opportunity to present their work. In addition to the award ceremony, the organizers arranged several workshops, thus adding more interest and content to the meeting. On Sunday, workshops were organized following a selection made in the previous days by the participants themselves. Therefore, the workshops that were carried out had amazing subject matter and interest since they were chosen by the participants. Here are some examples:

It was a common impression at the end of the event that such meetings (not only for awards) help us to see and hear new ideas, the ideas of other colleagues, to be informed and most importantly to exchange views, thoughts and, of course, to get to know each other.