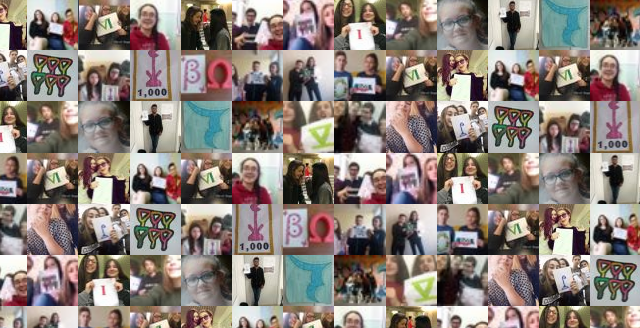 The 1AL and 1B classes cooperated with mates from partner schools Agrupamento de Escolas from Senhora da Hora from Matosinhos (Portugal) and SU “Zheleznik” from Stara Zagora (Bulgaria) on the project “Numb3rs”.

Thanks to this project the students deepened their knowledge of numerical systems of different civilizations, working cooperatively supported by their teachers of History, Classical Languages, Mathematics and English: for every system, each international group found the innovative aspects and the reasons why each was developed.

The students were organized into international groups that used a G-Suite environment, each working on a shared Google Drive folder, using text files and multimedia presentations and finally preparing a form on their presentation topics to be submitted to classmates. When all the groups completed their presentations, each student had to answer to all the prepared questionnaires obtaining a final score.

A written debate online session was organized among the partners: some students participated as audience voting the best thesis while others played the role of speakers defending a different numbering system from the one they had studied in depth. In this way they learned how to put themselves in the shoes of others and improved their dialectic skills in English, the language of the project. At the end of this Debate, the students participated in a Kahoot session among the partners with questions on all the topics covered in the group work.

As the final activity the original groups presented their work to the families and teachers not directly involved in the project, learning to speak in public, also in English, during the final video conference with the partners.

In this project students learned the history of the numbers, the basis of Math, deepening the reasons why each civilization developed their own numbering system, until they reach the modern concept of number and positional notation. Additionally, using a PBL approach, they became aware of their learning, they prepared quiz and they were able to discuss about the topic they were in charge to explore. During the online debate session they learned to argument and counter-argument the thesis they had to support. At the end of the project students were much more aware of the consequences that numbers (and Mathematics) had in human history.

Students were split into international groups, each of which deepened the concept of number developed by a civilization, then they prepared quizzes and tests the other teams had to answer to. Finally each student/group of students was assessed after a Debate online session using an online Kahoot quiz. The groups’ job was monitored and students were encouraged to work together and to use TwinSpace and a Google.Drive folder for their contacts.

The project “Escape from Math”

The class 1DL, on the other hand, participated in the eTwinning project “Escape from Math” having as partner schools the Lycée Saint Exupéry  (La Rochelle – France) and the Sophie Scholl Realschule (Karlsruhe – Germany). This project was based on the gamification and its aim was to create puzzles, riddles, games and, in the end, virtual escape rooms in which students could develop not only logical and mathematical skills but also improve their English skills, the project’s language. Planning collaboratively the virtual escape rooms, the students could use the storytelling basics, learned during the hours of literature, in a real context in which a catchy story had to be combined with reasonable and involving logical-mathematical questions. All these activities were carried out in cooperation, split in international teams, with international partners, working with G-Suite tools (text documents, forms, sites, spreadsheets), enhancing IT skills and remote collaboration.

In this cognitive path, the students also took part in a mathematical walk in the streets of the historical center of the city. The teacher of Art History illustrated the characteristics and history of the monuments. Students had to answer mathematical and logic questions in English: another example of how it is possible to combine Maths, foreign languages and Historical and Cultural Heritage.

In this project students had a different approach to their Mathematical curriculum knowledge. Using ICT in a more aware way, they could learn soft skills, that will be very useful for them in the future. The PBL and Game Based Learning approach helped them to be less afraid of Math and to considerate it a part of everyday life, with simple problems to solve, crosswords to fill, engaging stories to write.

The methods we used to achieve these goals:

These were oriented to a real online interaction, showing students how to plan and create a game,  creating some just for them and asking them to play together.

In all the games, the winner team was the whole international team, so if  during the online events there was no interaction, it was impossible for the team having a good score.

This stimulated the collaboration and a positive competition between teams, to create the better games and puzzles as possible and to solve them in a faster way.

These projects were very important for our students as they could learn Mathematics using a cross-curricular approach, seeing the same thing under many different points of view and developing soft skills that they would not have developed otherwise.

Combining Mathematics with Humanities is very important for developing a balanced knowledge and allows both teachers and students to collaborate and obtain a better vision of the chosen topic.

In these kinds of projects students may become teachers and teachers may learn from students and from colleagues.

Furthermore, group work and peer-to-peer collaboration allowed a less formal and more productive approach to knowledge, making students become responsible for their own learning and at the center of their training process.

The use of gamification, finally, gave very positive results, allowing to engage in activities even those students who are sometimes on the margins of work and tend to remain passive. Instead, in this case, we observed that the game-based approach involved everyone and made sure that in the final assessment even those who normally had negative or just sufficient marks obtained good results and were encouraged to do better even in more traditional teaching activities.