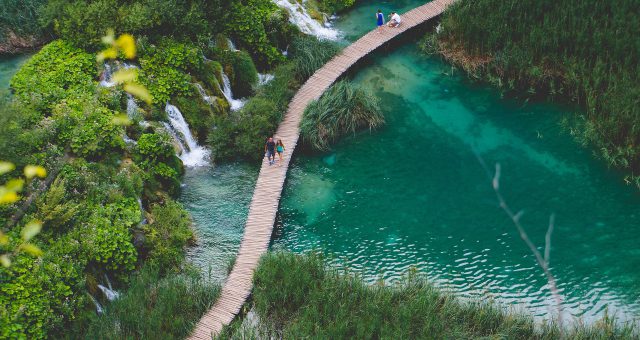 This article is the fourth one out of five, featuring stories about how teachers and their students relate to climate change.

Gorski Kotar is the mountainous region in Croatia between Karlovac and Rijeka. Because 63% of its surface is forested, it is popularly called “the green lungs” of Croatia.

Connection between man and the forest

When the forest is healthy, people do not pay attention to it, and when a problem arises, people begin to appreciate it and recognize its true value.

Natural disasters which hit Gorski Kotar in the last 4 years are the real ecological and economic disasters for this area. Some of the forest parts have changed their appearance significantly and instead of enjoying the view of the forest wealth, the locals of Gorski Kotar can conclude that the gorgeous landscape fairy tale has turned into a horror scene. Instead of the rich and dense forests, the view often catches dried coniferous trees and the ruined pumice trees that, only in the summer, conceal their unnatural appearance when coming into leaf.

In February 2014, Gorski Kotar was hit by an ice disaster. From the weight of the ice, trees broke down in forests, the roads become unusable, people remained without electricity and water for up to 20 days.

The consequences of the ice disaster in numbers: The spruce bark beetle is a parasite that slams under the tree bark and is able to destroy the tree in just a few weeks. The insect usually attacks only sick or demolished trees, and as such after the ice disaster in the Gorski Kotar forest, spread on healthy spruce trees as well, where in some areas 50% of spruce forest was destroyed. A strong stormy wind which lasted for days destroyed at least 500,000 cubic meters of wood. The resulting damage is the result of abundant rainfall that was falling before the wind, and softened the ground, so the combination of softened ground and wind destroyed trees. Natural disasters are the consequence of the more pronounced climate change, which unfortunately is witnessed everywhere in the world, and the Gorski Kotar region, due to its geographic position and relief, is subject to these extremes. Many ask questions about what happened to the gorgeous forests and how to rebuild them after such disasters.

In finding a solution to the question, the students of the Elementary School “Petar Zrinski” Čabar, accompanied by their teachers, visited the Parg meteorological station. The meteorological station manager presented her work to the students, showed all the instruments they used in their work, and explained them in detail the functioning of each measuring device. She explained that the above-mentioned measurements concluded a rise in temperature (global warming), and presented results that show that 2016 was the hottest year since the beginning of meteorological measurements (data 1/2017). The students were able to see how the measurements are conducted, as well as the process of encrypting and introducing data that is then sent to DHMZ (National Hydrometeorological Institute). The images featured are the author’s own, except for the cover image.