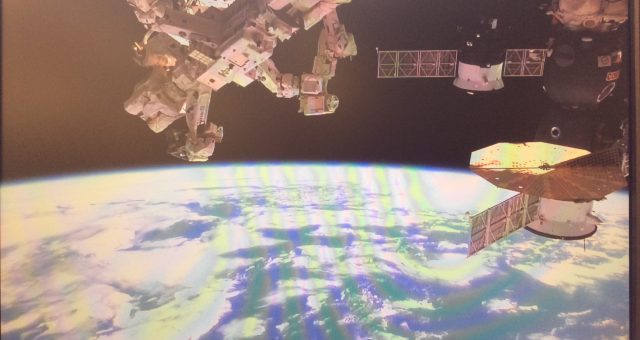 A long time ago, when I was the age of the students I’m currently teaching in Fulneck School, Leeds in the UK, I was dreaming of becoming an astronaut. That was until I tried going on a roller coaster. I will not trouble you with the remaining of the story…

However, I have remained fascinated by Space and love teaching this topic!

There is a charming story behind the design of this gadget: a grandfather, Liam Kennedy, from California, USA, wanted to motivate his grandson to take interest in engineering  and computing and he came up with this ISS Above. Pictures are the author’s own

This computer is connected to a computer screen and the WiFi. It is running continuously in the back of my room. The screen displays several information in a loop. It indicates the position of the ISS in real time, with an indication of the day/night in the world. In itself, it is intellectually engaging to see how the trace of the ISS on the display changes with time due to its orbital trajectory, as well as realising that, on board the ISS, the astronauts will witness 16 sunrises in 24 hours. The display then switches to an information panel exhibiting when the next ISS passage above our location is, and where to look in the night sky to see it, with many other information such as azimuth, magnitude, length of pass, etc… The computer board is also equipped with flashing lights to make sure that you do not miss the next pass over your location. It will then display the list, role and pictures of the astronauts currently inside the ISS, their nationality, as well as a list of events from space walk to docking of supply vehicles. If that sounds interesting enough….

… the best part is still to come… The computer screen then displays what the astronauts see when they look out of the cupola . It streams live video from the external cameras on the Space Station whenever the ISS is in sunlight. That’s 46 minutes out of every 92… during I find it hard to teach.

My students have witnessed the arrival of a supply vehicle, live! They marveled at the Canadian extension arm sometimes visible or the Soyuz capsule. They saw hurricanes that affected the West Indies and Florida and some weather system. The views from some areas of Earth are magic, beautiful, captivating. Up there, the Sun is always shining…and teaching feels …weightless!

One Response to “Have a window into Space from your classroom”