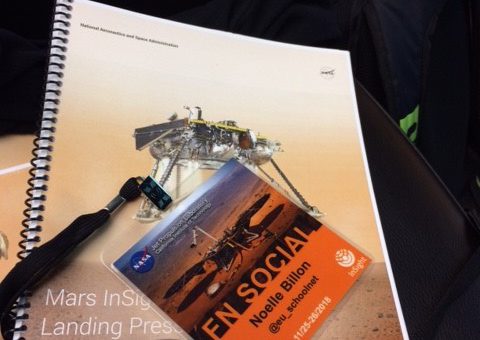 Second day at the Jet Propulsion Laboratory (JPL) in Pasadena, “the landing day” or also called “D-Day” for the InSight team, but also for the partners of the project in France (Centre National d’ Etudes Spatiales, Institut physique du Globe de Paris, University of Nantes, SODERM) who had worked on the seismometer for the last past years.

We (I and Fatima Moujdi, coordinator of the Schools Tuned Into Mars project) started the day at 9:00am with the other social media influencers in order to get some of the Mars landing vibes. We were not the first arrived of course as engineers at NASA’s Jet Propulsion Laboratory which leads the mission, were already preparing for the spacecraft to enter the Martian atmosphere. The descent with a parachute and retrorockets, and touch down was expected for around noon PST.

After the 7 minutes of terror, InSight will have cruised 301,223,981 miles (484,773,006 kilometers), entering the Martian atmosphere at a top speed of 12,300 mph (19,800 kilometers per hour). As soon as we arrived at the JPL, we felt the anxiety and the excitement as NASA’s InSight spacecraft was expected to complete its seven-month journey to Mars.

The day started with meeting Jim Bridenstine, first administrator of NASA who was available to answer all our questions and take a few selfies with us as you can see below. He highlighted the international collaboration and the importance of communicating around this mission and the innovative research behind it. With Fatima Moujdi, coordinator of the Schools Tuned Into Mars project and Jim Bridenstine, first administrator of NASA. As part of the social media influencers, we also had the chance to meet incredible artists such as Matthew Inman (@Oatmeal) which made in front of us some great drawings illustrating InSight landing on Mars and the few hours of waiting before the landing.

Besides, we also met passionate engineers from all over the world, as for example Philippe Labrot below from the Institut physique du Globe de Paris in France who worked on this mission and its communication for about 2 years. I had this question in mind: How can teachers engage students about this space mission and show the technology and science used for the InSight spacecraft? As an example, Philippe Labrot showed us the InSight lego model which might be commercialized in the coming months and that you can see on the pictures, including the two scientific instruments of the lander: the seismometer and the heat flow probe.

You need to know more about what is a spacecraft and its instruments: NASA explains it under this link here: https://mars.nasa.gov/insight/spacecraft/getting-to-mars/

To get some hints about the technology behind InSight, check the picture below which details all the main parts of the spacecraft. We also learnt about the space grade aerogel developed at JPL, used for the Stardust and Mars exploration Rover, and made from 99,9% of air. The remarkable characteristics of silica aerogel—low density, light weight, and unmatched insulating capability—attracted NASA for cryogenic insulation for space shuttle and space exploration mission applications. This aerogel was used to insulates the electronics on Mars rovers! I also met with the Education Office at NASA’s Jet Propulsion Laboratory which works with NASA, mission teams, scientists, engineers, and educational organizations to provide students and educators with science, technology, engineering, and mathematics (STEM). They were particularly interested in Scientix and our activities about STEM education. Just one hour left before the landing of InSight, Fatima Moujdi, Stephanie L. Smith, the digital and social media lead at NASA’s Jet Propulsion Laboratory and everyone in the News room (VK auditorium were where we were sitting during the landing) were eating the “lucky peanuts”, hoping that it would turn well during the 7 minutes of terror.

You want to learn more about the 3 different steps of these 7 minutes of terror during the entry, descent and landing (EDL)? Check out this link: https://mars.nasa.gov/insight/timeline/landing/entry-descent-landing/

Finally, InSight successfully landed on Mars on Nov. 26, 2018 at 11:52:59 a.m. PT (2:52:59 p.m. ET). The entry, descent, and landing phase began when the spacecraft reached the Martian atmosphere, about 80 miles (about 128 kilometers) above the surface, and ended with the lander on the surface of Mars six minutes later. It is hard to describe the atmosphere from the News room but it was definitely a mix of excitement and relief.

As Stephanie L. Smith said before the landing “there is no day like Mars landing day” and the reaction from the team after receiving confirmation that the Mars InSight lander successfully touched down on the surface of Mars was there to prove it. People shook hands, exchanged high–fives, hugged, pumped their fist to celebrate this magical moment.

As you can see below, the first pictures of Mars from InSight were displayed and shared to the world instantaneously. After the landing and these few hours of unbelievable stress for the team of researchers and engineers of the InSight team, we participated to the post-press briefing with the entire InSight team, who explained to us the first results and feedback from the landing. As a tradition, the entire team gave out the high fives to all the principal investigators of the mission. From the News room, we really felt that this first step of the mission was the result of a successful collaboration between all members of the team. InSight — which stands for Interior Exploration using Seismic Investigations, Geodesy and Heat Transport — is the first mission to study the deep interior of Mars and we will soon learn about the Red Planet’s Deep Secrets. No doubts that Scientix will stay tuned about the upcoming resources that will be created for teachers and related to this mission.