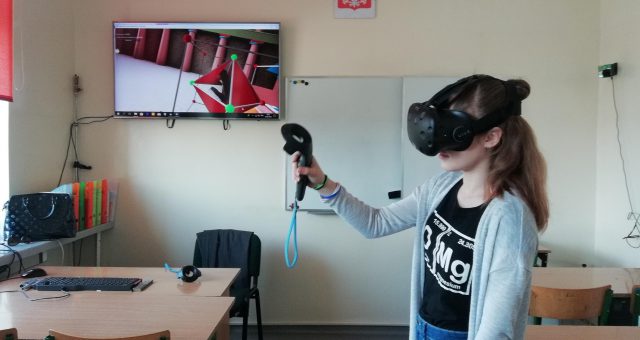 Although mathematics is described as the “queen of science”, by many pupils and adults it is perceived as a difficult and boring subject. Most pupils are quickly discouraged and feel that they are unable to understand or learn it. Therefore, it is difficult to teach mathematics with this approach, and it is important to overcome pupils’ aversion to this subject and to change their way of thinking. This can be done, for example, by using modern methods of teaching, including IT and computer software.

The objectives of core curriculum in mathematics include the necessity of shaping pupils’ ability to reasoning, use of information and applying the acquired knowledge in practice. However, the programs and manuals do not keep up with the changes in the surrounding world. Children learn formulas, conversion of units, make calculations etc. but they rarely have the opportunity to verify their knowledge in a specific situation. The results of external school tests also show the need for innovation in teaching mathematics. What is more, many pupils have a problem with space imagination. That’s why spatial geometry is particularly difficult for them.

A new tool for teaching mathematics and its implementation

NeoTrie VR (shortly “Neotrie”) is a new software package which is currently being developed by Virtual Dor (a spin-off of the University of Almería), that enables pupils to create, manipulate, and interact with 3D geometrical objects and 3D models of several types. They can paint, enlarge, rotate, reflect, and even get inside of solids. The software also includes activities and games to solve 3D geometric problems. Neotrie gives a great opportunity to make geometry lesson a very exciting experience for children in different stages of education. It expands their imagination and helps them to go into the mathematical world without fear. It is intended to interest pupils, stimulate their creativity and creative thinking.

Neotrie is tested as a part of mathematics lessons at the Primary School in Żernica (Poland). The purpose of these tests is to analyze the possible didactic applications of the program and formulate opinions and feedback for its further improvement.

The basis for the implementation of the software were the lesson scenarios developed based on the core curriculum in mathematics, in Poland. The classes have been conducted since March 2018 for children from the three age groups, namely: 11, 12 and 14 years old. The number of pupils in each class was 18-26. In total, 25 lessons were carried out. Moreover, the additional classes were also organized within the scheme of the scientific circle. The topics referring to angles, polygons, prisms and pyramids have already been implemented. In most of the classes the software was used during the whole lesson, sometimes only in a part of it, depending on the needs. The class in which the lessons were conducted is equipped with a large monitor (55”), enabling the teacher and all other pupils to control the activities done with the computer program. After each lesson, the teacher kept a log with the information about the tasks carried out, the advantages and disadvantages of the program as well as important hints for other users.

It was observed that during the lessons with the use of Neotrie the pupils were focused, disciplined and mobilized to work, and they were satisfied with the tasks successfully performed. It clearly seems that they find classes with Neotrie more attractive than those with the use of the other didactic methods. Since Neotrie had been implemented, the pupils became more engaged and open-mined during the mathematics lessons. They are now more active and prone to cooperation, especially younger children. Students with weaker results and special needs students also more easily overcome their timidity. Colorful image and sound raised the attractiveness of classes, and thus increased the level of assimilation of new knowledge by pupils in an involuntary and pleasant way, making the lessons more effective.

It is advised to organize an initial lesson for children explaining the basic tools and functions of Neotrie at the very beginning. It will help children to understand how to use Neotrie, and it will also increase their manual skills. This is especially needed for younger children (11-12 years old). It is also recommended to organize additional classes for the pupils where they can practice using the software controller and repeat the tasks again.

Concluding, Neotrie VR is an excellent tool for teaching spatial geometry, helping children to organize their geometric knowledge, increase their creativeness and have fun.