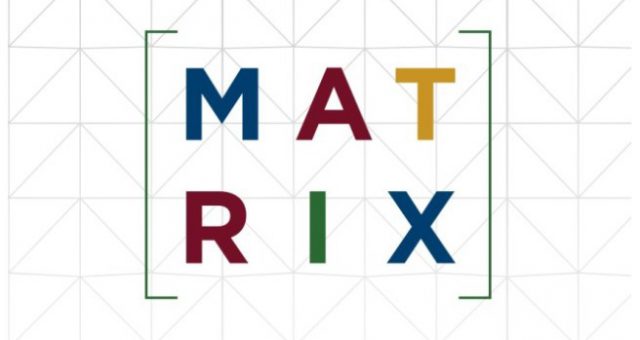 One of the leading trends in mathematical education nowadays is the return to the social perception of mathematics, from the vision of an incomprehensible science linked to memories of school failures, to the vision of an essential science for society which, in addition, children as well as adults can enjoy.

MATRIX 2018 (Mathematics Awareness, Training, Resource & Information eXchange) brought together over 150 participants from around the world, mainly mathematical education stakeholders, that came to Barcelona on 29-31 October 2018, aiming to exchange ideas and knowledge that would support the improvement of Maths teaching from the point of view of experimental and hands-on activities, thus helping these current (and much needed) methodological changes.

This edition of the conference (the third) was organized by MOMATH (National Museum of Mathematics – New York) and the MMACA (Museu de Matemàtiques de Catalunya), with the collaboration of CosmoCaixa, Museu de la Ciència de l’Obra Social “la Caixa” and the Museu Agbar de les Aigües. The central point of the event was the modern Agora at Museu Agbar, once a town water reservoir. The event was aimed at mathematical museums and communicators from all over the world, with the purpose of exchanging ideas around mathematical awareness and the mathematical outreach in various learning environments.

12 years ago, a group of professors belonging to various Maths education associations prompted the creation of a museum of Mathematics. One of the main ideas that guided this initiative was to bring Mathematics to the general public, and especially to pupils, from a playful point of view, by offering challenges that stimulate intuition and collaboration, and that lead to the “re-discovery” of mathematical concepts. This approach involved an important change in the traditional presentation of mathematical concepts. “The material we have created” explains Guido Ramellini, one of the vice-presidents of the MMACA “are accessible, ludic, manipulative and respectful of the multiple intelligences, highlights what we believe is the essential part of Math education: reasoning, understanding, studying and analyzing problems and discovering solutions”. This social and educational connections have led to MMACA being chosen to organize the MATRIX 2018 in collaboration with the National Museum of Mathematics (MoMath) of New York.

During the Congress, the planned activities included open lectures (one each day), participants’ plenaries, Conversation Groups, a poster and exhibition area, as well as visits to exhibitions of the MMACA, Museu Agbar de les Aigües and CosmoCaixa.

The topic of the first open lecture, “Arts and mathematics”, emerged from the fascinating connection of the two cultural domains, more specifically from Escher’s and Leonardo da Vinci’s ideas, as well as from the use of mathematical structures as visual decorations, something quite common in our daily environment. But studying the properties these structures have, especially the relationship and transformation between different structures, raises some questions that can ignite interesting artistic explorations. Such artistic explorations lead the speaker, Rinus Roelofs, from the mathematical concepts, through computer animations, 3D models made by CNC milling machines, laser cutting or rapid prototyping to fascinating designs of sculptural objects, which can be manufactured in all kinds of materials, such as paper, wood, metal, acrylic etc.

The second open plenary conference “Catastrophes, diseases and crimes: predicting risks with Mathematics”, delivered by Rosario Delgado de la Torre from the Department of Mathematics – Universitat Autònoma de Barcelona started from a few intriguing questions such as: Can we predict the risk of a catastrophe? Even more: can we evaluate how the risk changes if we take certain measures to try to avoid it? What kind of person runs a higher risk of suffering from an illness? Can we evaluate the effect of risk factors or the protective factors on our health? What is the profile of the repeated law offender?

Apparently, Mathematics can help answer all these questions and many more! Although the old formula Risk = probability x impact proved itself schematic and useless. The Bayesian networks, however, introduced in the 1920s as a mathematical graph model that describes probabilistic knowledge of the relationships between variables that affect a certain non-deterministic phenomenon, have proven to be very useful for the risk and profile assessment, in areas as diverse as economics, medicine, environmental sciences and ecology, accidents, nuclear waste or criminology, among many. Some captivating examples of using this model in connection to machine learning for risk evaluation were provided, bringing up also the theme of responsible research and innovation, a theme that was discussed in the first Scientix Community of Practice.

Besides the two open conferences, each day included an “inspiring conference” open only to the event participants. The first talk, “The Big Data Phenomenon”, addressed the way that the convergence of three relevant – yet little understood – trends (big data technologies, artificial intelligence and interactive interfaces) are opening a great amount of opportunities in the new data economy, and changing the way organizations act. The speaker Eulalia Soler explained the difference between Big Data and Data Science and also evoked the Maths within the Big Data phenomenon and the two phenomena that underlie it: datification and the cloud. Her review of the new jobs related to these domains, their roles and the necessary skills were quite useful as a resource for talking to students about STEM-related future careers.

Inspiring conference no 3, “Role-play of coordinates & function dance”, was in fact a workshop that proposed a very special type of teaching resource for Mathematics based on role-playing, where the students and teachers themselves become points in a coordinate system. Participants were also taught how to dance “the functions dance”.

The third type of activity that the MATRIX 2018 participants took part in consisted in sixteen Conversation groups dealing with hot topics regarding Mathematics awareness. The focus of the discussions was sharing good practices about some of the specific aspects of mathematical outreach through exhibitions, workshops, fairs as well as tackling common problems or shortcomings in this activity domain. More details about the topics of the Conversation Groups are available here: https://matrix2018861590936.wordpress.com/conversation-groups/

The various exhibits displayed during the event were another source of inspirational new ideas.

It was interesting to see that there are (at least) two sides of the “mathematical museum” term. The first one, the most common probably, would be a place conserving and displaying historical mathematical artefacts (preferably while offering some interactivity or ways to involve the visitors). The second category, illustrated by MMACA and MoMath, presents a range of experiments and activities closely connected to mathematical concepts and domains – therefore the term “math center” being a more appropriate one. It was touching for me to learn that in many cases, the creation of these centers was ignited by initiatives of dedicated teachers, on volunteer basis.

One of the most interesting topics in the discussion groups addressed the connection between formal and non-formal math education. A question that emerged was: does the math center have to be connected to the school curriculum? Should it enhance emotion or content? The general opinion was that even if the main aim in a museum visit with students would be motivation, changing students’ feelings, experimenting with friendly and playful Maths, empowering curiosity etc., there has to be enough connection to their Maths curriculum to avoid a hiatus, a wall between the two types of learning. A good approach for this is the collaboration between formal and non-formal Maths educators, more specifically between museum and teachers, who could support each other in making such activity a complex and effective one, as opposed to an isolated moment. This type of education-museum-research collaboration already exists in some countries, such as Scotland, where teachers are offered free weekly workshops on the topic by museums. Another interesting aspect was the collaboration with parents, as educational actors, many of museums having family-focused activities on regular basis.

Another discussion that provided a lot of food-for-thought was the one about the advantages and disadvantaged of virtual versus real exhibits and learning resources. Some really interesting virtual resources were presented by projects such as Atractor, Nrich, Neotrie VR, Imaginary. MoMath comprises an extensive use of technology and unconventional input methods, while by contrast, museums such as MMACA, Il Giardino de Archimede, Mathematikum or Fermat Science deliberately keep the digital exhibits to a minimum, one of the points for this being that the real exhibits and teaching resources are more “sharable”, they attract collaboration.

Finally, a third conversation group that brought enticing ideas was focused on math dissemination for changing negative perceptions and stereotypes of Maths and mathematicians, such as the uselessness and boredom of Maths, or negative feelings: Math anxiety, connections to bad school experience, the fear of being “evaluated”. Some of the present mathematics communicators and outreach specialists offered examples of activities to counteract those: from funny problems (how many ping-pong balls are necessary to raise the Titanic?) to unconventional personae (the Naked Mathematician). The most controversial question was: between “fun Math” and “useful Math”, can we choose one – and if so, which one?

The overall spirit of the event could be synthesized (in Guido Ramellini’s words) as “a passion for knowledge and the strong desire to convey and transmit that passion to others”.