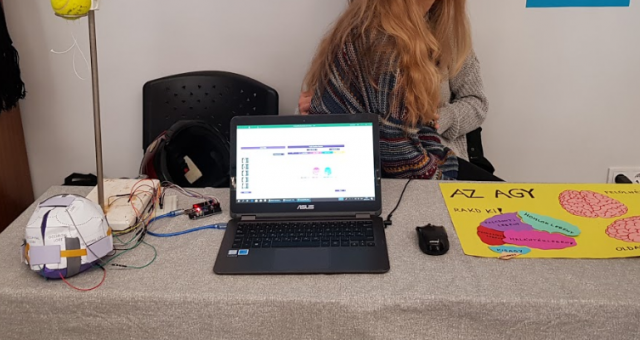 Science centers are wonderful places for informal learning.  Visitors can see flashy, colorful experiments and interact with captivating devices. It is a great way to awaken and keep the natural interest in Science of every student. So what can be better than visiting one? Building one for yourself of course!

In my school – the Alternative High School of Economics in Budapest (http://akg.hu) – students of the 10th grade worked for five days in designing and building a science center for the pupils at the 1st-5th grades. For four days there were no regular classes, all activities were organized around this goal and on the fifth day our Science Center opened with great success. The schedule of the week was the following:

Opening
Setting the theme and the frame of the work.

Advice from a pro
A popular science communicator Laszlo Zsiros (http://szertar.com) gave advice to the students in 60 minutes abut the key to successfully show science concepts, experiments and phenomena to others.

Video championship
Each student had to find a small (2-5 min.) science-related video on YouTube, preferably showing an experiment or phenomenon. They formed pairs and showed the videos to each other, then agreed on which was the more interesting one. After three rounds the students recorded how many times did they “win”.

Visit to a Science Center
In the afternoon of the day we visited a Science Center in Budapest (http://csopa.hu). The students had to write a report of one exhibit they found especially interesting or captivating.

Job application
The 13 students who were the most successful at the video championship were taken to separate room without their phones/laptops and watched Science videos while the other students filled out job application forms for the building of the Science Center. The question were about their favorite topics in Science, what are their strengths (electronics, design, graphics, writing, etc.), what role would they prefer in a team and what they expect of the following days. Once they had finished, the team leaders in the separate room got the anonymous applications and had to select the ones they would like to work with. This way they did not know who the exact person is, they were choosing only the role they wanted to have in the team.

Plans and budget
By the and of the day each team had to give to the teachers a detailed plan of what they wish to do and also a budget for it which could not exceed 10,000 HUF (around 30€).

Building
On these two days the teams worked on their own with supervision and help if needed from the teachers.

Opening of the Science Center
Our own Science Center was opened at 10 AM and was open until 2 PM. The younger students visited in groups and were given guided tours.

Here is what the 13 groups made:

This is something they found almost ready on the internet and is probably quite well-known. Using a projector and a Kinect sensor, a box of sand can be turned into an amazing colorful map. The details can be found here and while no coding was necessary the group still spent the two days with building the sandbox, installing Linux on a computer and calibrating.

Again this group used and built upon an existing idea. The exhibit was about parts of the brain and what certain parts are responsible for, together with a simulation of concussion and it’s effect on the brain. This part was based on a Hacking STEM project.

At first I was afraid that this project would be too dangerous but the students insisted on it and took every possible safety measure. Using a transformer from an old microwave they built a spectacular plasma arc. The exhibit was nicely designed around the states of matter introducing the plasma state to young ones.

Using some materials found in one student’s garage, this team built a giant zoetrope and built the exhibit around the illusion of how motion is perceived. The young students could build their own smaller versions.

This was a very simple but at the same time really interactive exhibit. A large relief map of the Earth was painted and LED installed at certain points. The visitors got small card with the description of natural wonders on it and by pushing the right button could see where on the map they were.

Travel through the Solar system

The students positioned scaled models of the planets of the Solar system on the corridor in distances according to their distance to the Sun. The little ones could sit and travel through space on a shopping cart, stopping at each planet a learning about its specifics.

This giant piano was made with the use of makey makey. The program for making the sounds was written in Scratch by the students.

As we were just studying the nervous system in Biology classes, the brain was a popular topic for the students. This group made a brain model, which could be taken apart and put together with Velcro. The original plan was to insert LEDs in it, but putting in the wires proved too complicated, so they did not do that.

The original plan was to make Galilei’s inclined plane experiment with magnetic levitation. This was the only group that could not carry out their idea, mostly because they spent too much time waiting for the magnets and when they got them and they did not work, they had no time to work out a solution. They settled on a simple Galilei plane.

This is a project based on a Hacking STEM lesson. Building the complete hand and the glove to control it is a real challenge to someone without experience in bread boarding and electronics. Still the group succeeded and even came up with a nice task for the visitors who could build just one finger using a straw.

This was a very ambitious project which partly succeeded. They built a Galton board and the idea was to connect it to a computer. Using Data Streamer . They planned to sense which pocket the balls are falling to and make a statistic calculation of the distribution. It turned out that two days was not enough to come over all the mechanical difficulties, but they were close to a solution.

Using an old desk and some plastic tubes, the students built a giant pan flute. By hitting the top of the tubes the visitors could make music. The most interesting for me as teacher was that the students had to find out how to calculate the required length of the pipes to have the exact tone. They did it without officially having learned of sound waves before.

Our own Science Center was a great success, the young ones were amazed at the wonders of Science, the older ones were really proud of their work. Each student wrote a detailed diary of their work to conclude the week.