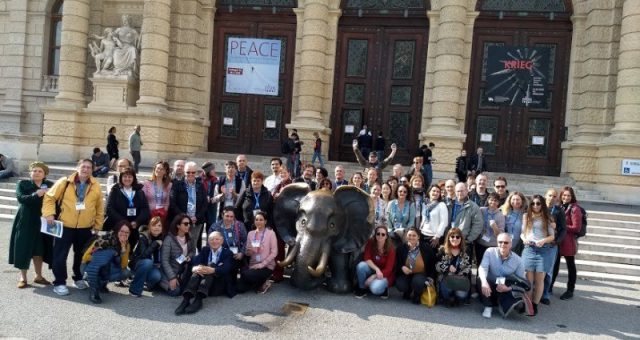 The European Geosciences Union’s (EGU) Committee on Education has been organizing the Geosciences Information for Teachers (GIFT) workshops since 2003. Selected top-level scientists working in the Earth sciences offer invited teachers talks centered on a different theme every year. This year, the workshop was organised between the 8-10 of April in Vienna. The topic this year was “Plate Tectonics and the Earth’s Structure Yesterday, Today, Tomorrow”. GIFT is an integral part of the EGU’s General Assembly. The main objective of the GIFT workshops is to spread first-hand scientific information to science teachers of primary and secondary schools, significantly shortening the time between discovery and textbook, and to provide the teachers with material that can be directly transported to the classroom. The programme this year unofficially started with a tour of the Natural History Museum Vienna, guided by Herbert Summesberger and Mathias Harzhauser. This year, 80 teachers took part from all around the world.

At the Natural History Museum in Vienna, we had the opportunity to see the Venus of Willendorf – the 29,500 year-old and only eleven centimeter tall statue, found in the Wachau in Lower Austria in 1908. She has been a fertility goddess, but what is certain is that she is a representative of female figures that survived the Paleolithic Period.

In the museum I also had the opportunity to see a vast collection of meteorites, explore some of the most exotic stones, rocks and gems including crystals, quartz, and many precious and semi-precious stones. In the meteorite hall there are over 1,100 meteorites, including Martian meteorites, lunar rocks and lunar meteorites.

There were large skeletons of the dinosaurs. The visit of the Natural History Museum of Vienna was astonishing. There is so much science and history, that once is not enough to see all this in detail.

On the 8th of April, the GIFT workshop officially started with a welcome speech from the EGU President, Jonathan Bamber from Bristol University in the UK and by EGU Vice-President Alberto Montanari, from the University of Bologna, Italy. Chris King, Chair of the Committee on Education also gave a speech. After that there were very interesting and useful lectures from top scientists. Some of the topics were the following: tectonic plates, optical instruments such as instrument telemeter, seismographs, GPS, etc.
was also impressed by the explanation of the convection of substances in a solid state beneath the Earth’s crust. These are all very interesting for my teaching.

The explanation of “The origin of earthquakes in and around stable plates” from Christophe Vigny, Ecole Normale Supérieure/CNRS, Paris, France was a brilliant lecture. Similarly to the lecture on ENVRIplus e-learning platform Giuliana D’Addezio and Marina Longhitani, INGV, Rome, Italy. This was a real positive discovery for me!

There were many other useful lectures such as “Use of satellite data (Earth observation and navigation) for Plate Tectonics applications” by Francesco Sarti, ESA, Frascati, Italy or “Some shapes of Plate Tectonics to come” byNicolas Coltice, Ecole Normale Supérieure, Paris, France and “Bridging the rift – Earthquake design of the Rion-Antirrion bridge” by Akis Panagis, Structural Department of Rion Antirrion Bridge, Patras, Greece and so on.

Within the GIFT workshop I participated in a poster presentation named “HUNTING THE STARS TO PROTECT THE DARK SKY”. The presentation was about the work of students in Orde Chopela High School in Prilep who perform an activity within the international educational project “Globe at Night” (GaN) for 11 years in succession under my supervision. With this project they have opportunity to get to know light pollution and the relatively simple way of measuring it.

GaN is part of the GLOBE project which is a worldwide scientific and educational project, which coordinates the work of students, teachers and scientists to study and understand the global environment. The students estimate light pollution by measuring the magnitude of the stars from the constellations Orion, Leo or some other constellations and additionally using the SQM to map a city light pollution at different locations to identify dark sky oases and even measure changes over time. We were the first school from North Macedonia which took part in GaN. It is very useful for us because we have used materials for science competitions (we have great results), the students find it a very interesting activity, they become citizen-scientists and as a result, it brings them closer to science. This activity definitely increases the level of conscience, IT skills, language skills of our students, they learn actively, make connections between their learning with real life problems, raises their critical thinking etc. The list of exhibitors can be found here.

You can find all the presentations and more information on the EGU General Assembly 2019 GIFT workshop and the past GIFT following this link.

The next GIFT workshop will held from 3-5 May 2020 in Vienna and the topic will be Hidrology in the past, today and in the future. I am very much looking forward to learn about this topic as well!