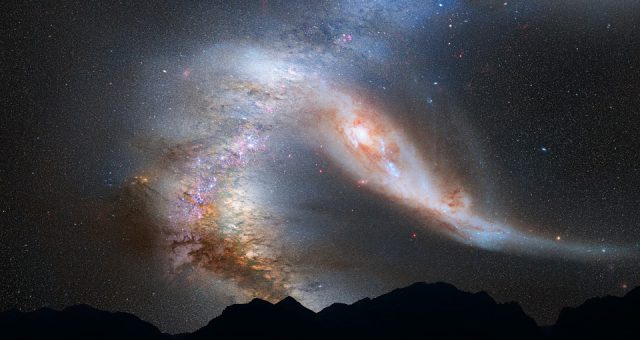 What does Science have to do with Diplomacy, Inclusion and Development? Science, although universally striving for objectivity, cannot always be regarded as isolated from politics or society. Current discussions about the cause and effect of climate change are just the most prominent examples. Participants of the International Astronomical Union’s anniversary event “1919-2019: 100 Years Under One Sky” therefore took the occasion to discuss the relation of science with diplomacy, development and inclusion.

“Science for peace has to be conducted for the sake of science, otherwise scientists would not be interested.”

Science and policy exist in a two-way relationship: Science can lead to policy change, but policy can also stimulate science. As the example of climate change shows, the results of research and scientists’ calls for action, are not necessarily translated into political or social action. Not only can research be met with ignorance, it can be met with criticism and contestation. While criticism bolstered by facts and scientific methods is conducive to the scientific discourse and innovation, contestations merely based on emotions and political calculations can be harmful.

The 20th-century competition between the Soviet Union (USSR) and the United States (US) to develop faster and more advanced spaceflight capabilities within the context of the Cold War is another example of how politics and science are intertwined. This “space race” was far from being purely driven by scientific objectives but bore an explicit symbolist and ideological dimension. Ultimately, this is a perfect example of how policy can shape science.

Yet, there are also good examples of how political will joined forces with science. After a global immunization campaign, smallpox, “one of the world’s most devastating diseases known to humanity” was declared as eradicated in 1980[1]. This campaign was led by the United Nations World Health Organization and enjoyed the political support necessary to fund an immunization campaign of such large scale.

Another example of international cooperation to address global problems pointed to by scientists were the concerted efforts to stabilize ozone levels in the atmosphere and “close” the ozone hole in the late 1980s. Scientists raised the issue that the level of ozone, the Earth’s natural sunscreen, continuously deteriorated in the planet’s atmosphere in the 1970s. Fears of the effects on both humans and nature, such as increased chances of skin cancer, eventually led to the adoption of the Montreal Protocol in 1987, which effectively banned the production of ozone-depleting chemicals. As a result, NASA calculations show that global ozone levels stabilized since the mid-1990s and suggest that “the size of the hole should return to its pre-1980 levels by about 2075.”[2]

In particular, Chris Llewellyn Smith from the Oxford University presented a few examples of research centres that aim at bridging the East-West gap. While the International Institute for Applied Systems Analysis (IIASA) and the International Thermonuclear Experimental Reactor (ITER) rather follow a top-down approach, the research centres SESAME (Synchrotron-light for Experimental Science and Applications in the Middle East) and CERN (Conseil Européen pour la Recherche Nucléaire) follow more bottom-up dynamics. Smith noted that “science for peace has to be conducted for the sake of science, otherwise scientists would not be interested.”

The influence that science can have on peace remains contested. Nevertheless, science can be seen as a common language as all scientists use the same methods. Given the occasion, astronomy in particular, has potential to encourage a sense of global citizenship as we all live under one and the same sky.

“Thanks to education, I could pursue my dreams”

This brings us to diversity and inclusion in science, which is composed of a plethora of different scientific disciplines. Astronomy, in particular, builds on various fields such as Physics, Biology and Chemistry. Amelia Ortiz Gil from the Astronomical Observatory of the University of Valencia, therefore, thinks that astronomy has the prerequisites to be diverse on more than just one level. To underline her point, she reminded the audience that many great scientists in history had some kind of disability, such as Newton, Goodrick, Edison, Einstein or Hawking, just to name a few.

And yet, many barriers that hinder individuals from taking part in science still persist. This can be the financial, educational or academic background but also inherent factors such as gender, ethnicity or sexual identity. The Nashville Recommendations to Inclusive Astronomy therefore set a statute to break barriers of access to science. What we need is to rethink the environment in which we practice science. To begin with, barriers to knowledge and tools need to be removed. For instance, one could use colour-blind friendly graphs. But also on a higher level, when it comes to access to power, policy and leadership, inclusion must be improved.

Overall, science and its various fields might be diverse, but the ways of inclusion are up to us to shape. It is only if we manage to work in a truly inclusive scientific culture that we can benefit of diversity.

In this sense, science is closely linked to development. Anne Glover from the University of Strathclyde and President of the Royal Society of Edinburgh, states that science can liberate us from superstition, which can hinder us from development. Instead, she says, it is the rational approach that enables individuals.

When discussing science and development it is however crucial to bear respect for local traditional value systems and beliefs. As history has shown, the European and later Western imposition of progress, science, rationality did not necessarily result in development but rather in devastation and the destruction of local structures that had existed hundreds of years before. Columbus’ “discovery” of the Americas (although the people living there had obviously discovered these lands long before) could be the most prominent example of how the European value system had been imposed on others. The same happened to virtually all other continents beyond Europe. Colonialism, when it comes down to it, had sadly been justified by a superiority of (Western) science and rationality. Ultimately, it is important to be aware of the historical dimension of science and “development” and that the latter is, in the end, a Western construct.

Nonetheless, science does have the potential to spur innovation, improvement of living conditions and, in short, development. Khotso Mokhele from the National Research Foundation and Chancellor of the University of Free State advocates for the advancement of astronomy on the African continent. “The digital revolution provides us with an incredible tool kit to bridge the gap in the middle of the continent,” he says and adds that “we can inspire development.” He hopes that with science as a key, citizenry will develop further on the continent and drive innovation. The Science, Technology and Innovation Strategy for Africa (STISA-2024) can be a good starting point for this.

To wrap up, this excursion has shown that science, although striving for objectivity, is not isolated from politics or society. Whether it is diplomacy, inclusion or development, science always is interrelated to society and politics in one way or another. Beyond the object of study itself, this is what makes science so exciting!

This blog article was inspired by the presentations at the International Astronomical Union’s anniversary event “1919-2019: 100 Years Under One Sky” – Celebration Flagship Ceremony, that took place on 11 and 12 April 2019 in Brussels. For more information on the programme and the speakers, visit this webpage: https://www.iau-100.org/programme-brussels-event