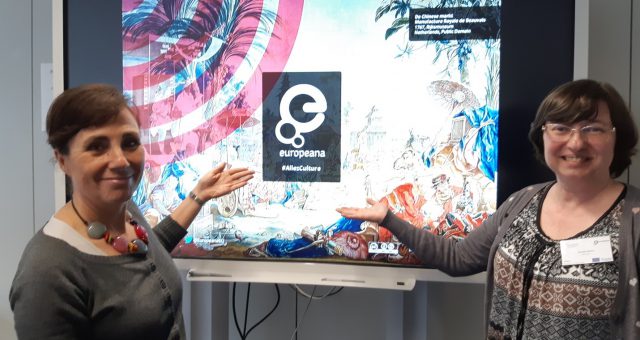 In 2014, 100 years had passed since the outbreak of World War I and, throughout Europe, quite a number of events were planned then under the auspices of the European Commission. The “Europeana 1914-1918” project arrived in Sibiu, my town, and the Library of “Lucian Blaga” University hosted it on 23-24 May 2014. It was a caravan of gathering memories from 1914-1918. The aim was to collect – and afterwards publish on the Internet – family memories and personal war stories to help future generations better understand the impact of World War I on ordinary people on the continent. The project had started in 2011, succeeding in attracting thousands of people, who contributed original stories and memories, previously unpublished, thus enriching the digital archive that offers now a staggering number of sources for research, education, exhibitions and commemorative events. The library provided a generous space for this event, and specialized staff conducted interviews with the public and described the digital processing of the material. The event was of course illustrated on the Europeana website and blog, and the materials gathered during the campaign got stored on the Europeana website, where you can find them now.

Europeana is Europe’s digital cultural heritage platform and provides access to almost 58 million digitized items from more than 3,700 European museums, galleries, libraries and archives. Over 20 million of these artworks, artefacts, books, films and music are openly licensed and can be freely reused in various educational and research projects. Europeana can consequently provide multiple perspectives on historical, political, cultural, economic and human developments across Europe and beyond, thus offering a space where culture professionals share digital expertise and encouraging Europeans to engage with their cultural heritage and even contribute their own personal experiences, as with the “Europeana 1914-1918” project.

The Europeana Digital Service Infrastructure (DSI) connects the online collections of Europe’s cultural heritage institutions. Europeana has been collaborating with European Schoolnet (EUN) for a number of years now. EUN’s mission in the Europeana DSI-4 project, which continues the work of the previous three DSIs, is to promote and expand the Europeana education community. Three key activities are being organised: two groups of teachers are coordinated: the 13 Europeana Teacher Ambassadors and the Europeana Education User Group of 130 teachers; the Teaching with Europeana blog space is maintained and updated; the “Europeana in your classroom: building 21st-century competences with digital cultural heritage” Massive Open Online Course on the European Schoolnet Academy has been rerun and translated into Spanish, Portuguese, French and Italian for the editions in 2020 (in English it will start again on 13 February 2020, in Spanish, Portuguese, French and Italian it will start on 16 March 2020).

What does Europeana offer for a STEM teacher?

I won a contest with my entry that used various Europeana images creatively – it was the STEM Alliance Competition during the STEM Discovery Week 22-28 April 2019. The text introduces the job of a forensic anthropologist and the work on analysing human DNA based on different types of materials, such as blood, bones, saliva or dirt. It raises awareness about the importance of STEM education and careers among fellow teachers and motivates students to choose a STEM career in the future, by using real-world examples.

Recommending the platform to my students when they do different research activities has resulted in numerous pupil presentations that are successful and valuable. One such example is a display of the history of writing instruments through the eyes of children. The authors are students aged 12 and they were direct beneficiaries in the Erasmus+ project 2017-2019 in our school entitled “Enhancing student and teacher success through STEM education”. They presented the SlideShare to a diverse audience at the Open School Day in May 2019.

So far, there were several Science Projects Workshops in the Future Classroom Lab in Brussels, Belgium – like the one organised by Scientix and Europeana in 13-15 April 2018, which represented for me 15 hours of learning new digital ways to enjoy STEM and cultural heritage with the declared purpose of enriching future lessons and opening up possibilities for our students in terms of their potential careers.

Being a Europeana Education User Group teacher since March 2018, I have been involved in testing and evaluating learning scenarios based on Europeana Collections created in the Europeana DSI-3 and DSI-4 projects. The most valuable part of my work as a Europeana User Group teacher is two-fold. First it resides in the realisation that Europe’s wealth of cultural heritage can be exploited in all subjects at school.

Second, it embraces the collaboration among teachers, which has reached beyond the isolated classroom. The Romanian User Group, coordinated by fellow teacher Maria Isabela Miron, have been creating and testing learning material using Europeana content for eight months now. Similarly, the other Europeana teachers, members of the other national User Groups, people from various cultural backgrounds, with different professional experiences, have brought their skills and practices into the project for this purpose, and we all have been connecting knowledge and efforts in order to open up and broaden the European experience.

We, the members of the User Groups have found ourselves working in an environment that promotes efficiency and well-being. It feels like a community that helps overcome isolation that comes from lack of access to a central, social workplace. I constantly experience the other Europeana teachers as co-present and available, while at the same time am able to concentrate on my own work. Our virtual collaboration fosters our ability to work productively and drive engagement.

It’s possible to watch Europeana webinars, moderated by Europeana Ambassadors, in a number of languages, each presenting an overview of the use of digital cultural heritage in education and exhibiting the Europeana platform and resources, also guiding any interested teacher through the “Teaching with Europeana” blog. This YouTube playlist holds the recordings of these webinars and more: information about the DSI-4 project, Europeana seen by students and teachers’ reflections.

The Teaching with Europeana blog is first and foremost a meeting point for teachers searching for resources and advice connected to much of Europe’s rich digital cultural data. It is in fact a space dedicated to encouraging teachers – bloggers, commentators, lurkers… – to convey their experiences connected to using Europeana resources in their classroom. It has on display a catalogue of learning scenarios based on Europeana content, updated almost every day. There are also stories of implementation on how the learning scenarios presented are being implemented by teachers in their classrooms.

Additionally there is the LinkedIn group. More than 500 members talk about Europeana resources and initiatives for digital learning, discuss relevant topics and possible projects with like-minded peers, share best practices and case studies of reuse of Europeana content in education. They all believe that Europe’s digital cultural heritage has an important role to play in education and want to work to make this happen.

Europe’s wealth of cultural heritage is part of people’s everyday lives. The ample and diverse Europeana Collections will undoubtedly continue to assist educators in enriching their lessons by creating and implementing relevant learning scenarios with digital culture at their core.

All images used with permission or the author’s own.

2 Responses to “What does Europeana offer for STEM teachers?”