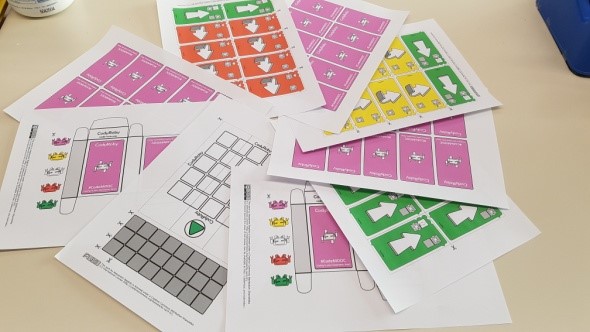 All pictures are the author’s own.

It was January 13th 2016 when Prof. Alessandro Bogliolo (University of Urbino) launched the first video lesson of the MOOC: Coding in your classroom, now! Hundreds of teachers followed him, interested in introducing coding and computational thinking in their classrooms. Since then, that learning Community has grown exponentially. There are currently over 34,000 members in the online support group for the homonymous course. Even though time passed and many things happened, the main goal has remained the same: to use intuitive and fun activities to play with programming, creating new ideas and finding solutions to everyday problems.

Cody Roby was born on November 23rd, 2014 at 2:24, when Prof. Alessandro Bogliolo with a post on the codeweek.it blog announced: “I’m pleased to introduce Cody and Roby”, encouraging people to participate in the European Robotics Week by organizing simple activities based on the first version of Cody Roby, an unplugged programming method.

It is a game played to develop games and, as it is also a language, it can be used to build other activities. Cody Roby entered into the classroom because it is a flexible tool for all teachers of various levels and disciplines. The evolution has been rapid: from the downloadable kit from the internet, it has recently reached the creation of carpets and giant cards. Since 2015, several special editions have been created for EU CodeWeek, Africa CodeWeek and EU Robotics Week, with themed decorations.

Currently, Prof. Bogliolo has started to bring coding not only into schools, but also to cinemas, theatres, universities, and squares, during live events, involving teachers and students. Many other MOOCs (Massive Online Open Courses) have followed approaching the importance of daily life algorithms and the human part of digital and programming.

Coding is for everybody, not only for programmers. This concept has been the leitmotif of many literacy Campaigns that, in recent years, have involved Italian Schools massively.

In 2016 the first coding Summers School, organized in Urbino, strengthened the sense of belonging in the active Community of teachers who participated. The game paradigm of Cody Roby has become expedient to create the Coding Treasure Hunt, led by a BOT Telegram, developed by the University of Urbino. It has now become the main activity of Cody Trip, an educational trip to Urbino to visit the UNESCO-listed Renaissance city and live an immersive coding experience in the Duke Cinema-Theatre, where CodeMOOC live event was born.

The formula, now tested over the years, in 2018 was also documented by RAI Scuola, an internet TV channel. In a special episode, a new type of School approach was told, through coding experiments and challenges to the latest QR code to find the hidden treasure. In addition to solving coding quiz, visiting the Duke’s Palace and discovering the most suggestive corners and monuments of Urbino, students also try to solve riddles posed by famous artists such as Giovanni Santi and his son Raphael (Raffaello Sanzio), demonstrating how transversal and interdisciplinary are part of the coding practice.

In 2017 Cody Roby was the topic of the broadcast called Coding on RAI Scuola. The tourist and The blind date are shown as examples of activities carried out in the classes to improve computational thinking in a playful way. Since then, his pawns and the chessboard have become the setting for many strategy games. In June of the same year, during a meeting at school, CodyRoby also inspired the creation of a floor App called CodyWords, to play at forming words by programming.

In the second Coding Summer School (in 2017) CodyMaze was invented. It’s a game played on a virtual checkerboard (5X5) consisting of 25 QR codes. Scanning them using a smartphone, you become a robot and receive instructions from a BOT Telegram, which generates a path through the invisible labyrinth. By following the instructions of increasing difficulty, between loops, conditional and nested constructs, you can find your exit way and get your certificate (for an Hour of Code).

CodyMaze, the invisible labyrinth, launched the so-called Coding in the Square, making adults and kids play in many Italian squares, from Naples to Trieste, anticipating the concept of what would become the CodyMaze playing Field in Mirabilandia. The prototype was presented and tested in September 2019 and it will be active and playable in the amusement Park from March 2020.

Moreover, during the Summer School for teachers, the structure of a new didactic game called Competence Cody Game was developed, based CodyRoby rules, which tests students with questions on various disciplines and, of course, on programming constructs.

The Diary of Coding was presented in September of the same year.  CodyRoby is the main character with CodyDiary 3D app to play with coding and augmented reality.

In 2018 RAI Scuola produced CodyGames, a program shot in Rome where, in each episode, new floor-standing educational activities were created, based on the CodyRoby instruction set. Among the offered games, there are The duel, a variant of CodyWord and Competence Cody Game, CodyMath, The snake and The Conquest. During the Summer School of the same year, two other important variants of CodyRoby were tested: CodyFeet, suitable for kindergarten children, to approach coding when abstraction is still premature, and CodyColor, from which also an online version was born.

Prof. Alessandro Bogliolo has become the Coordinator of the European Ambassadors of CodeWeek, bringing the Italian coding tools and the Community of Practice to a wider stage.

The battle of CodyColor was played by teachers from various Countries during the European Coding Summer School, held in Brussels in July 2019, and simultaneously by students from schools of all Countries. Prof. Bogliolo’s interactive Italian and English webinars become a model. The participation of Italian schools has consistently characterized all the Coding Literacy Campaigns, demonstrating the desire for a change in the pedagogical approach.

Focus is on the implementation of the tool to develop coding within students and, on the other hand, on the development of servers, platforms, and apps to extend programming on various channels of action.

During the last Summer School 2019, the first CodyRobyDojo was inaugurated in Urbino at Digit, a university spi-off that develops sustainable digital platforms for social innovation, which also supports the dissemination of coding.

In this regard, a special showcase, linked to CodyRoby, was set in Urbino. It dialogues with people and every month the challenge changes. Last December, you could play CodyColorWall, an interactive wall game then made available to teachers and therefore for students. From January the main theme is Shoa Memorial Day to remember the atrocities against Jews.

Recently, the giant carpet of CodyRoby has been enriched with dowels, called CodyQR which, connected to a server, allow you to update its behavior and change activities. After testing it with HiddenCodyColor, the new boxes show music and colors and challenge users to look for a ring route to discover the melody.

During these years of (re)discovery of coding at school great energy has been given by code.org (also in the Italian version of programmailfuturo.it), which offers free lessons and activities on the online platform. Including issues and reflections that are also related to a sustainable future. The Italian Ministry has also done its part by investing in coding and making it mandatory in schools (kindergarten and primary schools) by 2022. The European Commission also recognizes and rewards the participation of schools involved in the EU CodeWeek with the Certificate of excellence in Coding Literacy. The Ministries of the European Countries have employed many resources to support teachers and their professional training, through coding development and integration in school subjects.

The successes obtained so far, show that apparently difficult concepts can be transmitted through the realization of practical examples that make learning more stimulating and involving to all age groups.

It’s a creative logical process that involves a metacognitive reflection dealing with real-life situations within an analytical way, breaking down the various aspects and planning the most suitable solutions. Such strategies are indispensable in programming computers and robots, which need precise and structured instructions to carry out the required tasks. These are important skills to face the challenges of a complex society and to build future active and aware citizens.