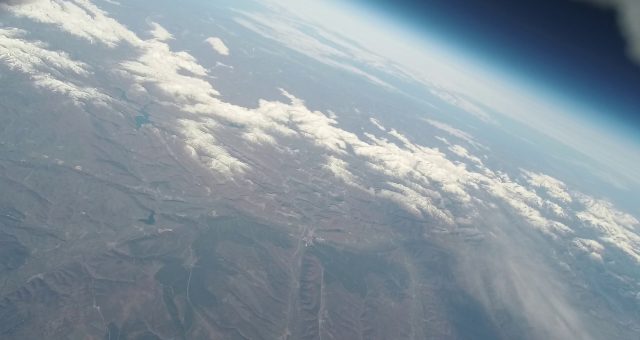 During the last year, a group of students for the Candás secondary school (Asturies, Spain) was working in the design, construction and testing their first “school space mission”, consisting in launching a high altitude balloon to the near-space from the Antonio García Bellido secondary school (León, Spain).

The project emerged from the collaboration between teachers from both schools, as a result of the Spanish Scientix Conference held in Madrid in February 2019.

The main purpose of this experience, from the scientific point of view, is to approach the climate crisis and environmental sustainability, one of the issues that most concern our society. We want students to reflect on the human impact on climate change and play an active role in the global response to climate change.

We also propose to focus on the topic of space and space missions and how their exploration allows us to have a better understanding of our planet.

In this sense, the objective is to study the atmosphere, composition, properties, and dynamic phenomena by launching a stratospheric device, driven by a helium balloon and equipped with electronic systems to measure physical parameters and an SD card for data recording and further analysis.

See picture of the preparation of the activity below

From the pedagogical perspective, our students were encouraged to demonstrate that it is possible to launch a high altitude balloon in an educational environment, and they were able to look for information about similar experiments, design electronic systems, and mechanical elements, as well as they, could design, elaborate and integrate the different systems; moreover, they could conduct some hands-on activities to test the performance in different extreme space-like conditions. The most challenging issue was to search and recover the payload after landing to analyze the collected data, images, and videos.

The students worked in groups on the design of the capsule, the electronic instrumentation, and the assembly and launch systems, as well as the preliminary tests with the aim of minimizing possible eventualities and unforeseen events. The probe was equipped with an electronic system, based on Arduino technology, for taking data of inner and outer temperature, pressure, humidity, etc. and its recording on an SD card. A GoPro camera was incorporate to take images and videos during the journey, as well as two systems with GPS and an APRS device for surveying the path during the flight and, especially, for its location and recovering after landing. All these devices were conveniently fastened and protected in a polystyrene container. See picture of the launching:

The launch took place in the playground of the IES Antonio García Bellido, in León, since the orography around the maker’s school is not very suitable for the recovery of the payload after landing, because is located surrounded by high mountains and the sea. Around more than an hour after launching, the balloon reached its maximum altitude (around 25000 m), with an external temperature of around -60 ºC, and an approximate diameter of 8.5 meters, the balloon exploded and right away a parachute was deployed to facilitate the return, achieving a decent rate of around 5 m/s, somewhat higher than initially calculated. Initially, it headed west and, at an altitude of around 14,000 meters, veer east due to different laminar air currents in different layers of the atmosphere. It remained flying over the León sky for approximately 2 hours until it landed in a peaceful place near the Torío river.

A group of 30 students traveled by bus to León; further the necessary equipment for the launch, the coach was loaded with mountain bikes, in order to recover the payload if it fell in a remote area or with difficult access for another type of vehicles, which finally did not happen. Later, the students from both schools prepared a report analyzing the temperature, humidity, and pressure variations. The curvature of the earth could be observed in the images taken from space, as well as the black sky as a consequence of the lack of air and Rayleigh dispersion.

The launch, carried out on December 4, 2019, was initially scheduled for May 24, but was successively delayed due to weather conditions, the school holidays and the occupation of airspace by parachute maneuvers by the air force. The meteorological predictions were used, using specific software, to make an approximate calculation of the balloon path, so it was necessary to wait for the weather and the different air currents to be favorable.

By participating in this project, students developed 21st-century learning skills like creativity, innovation, communication and collaboration, critical thinking and problem solving, as well as life and career skills like productivity, perseverance, leadership, and responsibility.

The preparation of the project was very challenging work, both from a technical, logistical, and administrative point of view. This activity would not have been possible without the collaboration of different individuals and institutions who, understanding the benefit of this activity for students and its contribution to improving the quality of education, were involved in the different stages in a fully altruistic way. The URE (Union of Radio Amateurs of Spain) contributed with the APRS tracking technology, through its international network of stations and signal repeaters and the collaboration of the community of radio amateurs, the payload was heard directly by stations more than 500 km away and reported their position via the web. The company Carburos Metálicos understood the educational value of the project and provided the helium bottle free of charge to get the balloon going. The ITMA (Technological Institute of Materials of Asturias) opened access to its facilities in Avilés for thermal tests in its cryogenic chambers, with the aim of verifying the operation of the equipment in extreme conditions at high altitude, while these tests lasted, they offered a guided tour of the center for students and parents. The Poeta Antón school provided its facilities, due to the height of the building, for parachute tests, in order to determine the descent rate. The Helio Brothers ice-cream shop made it possible to carry out the first operational tests of the different systems at low temperatures. The ENAIRE Airspace Operational Coordination Department advised on legal aspects and provided the necessary permissions and was in charge of issuing the Notam (notification to airmen) to report the event to the aircraft flying through that area of airspace during the ascend and descend. Real-time two-way communication was established from the two hours prior to launch, with the control tower of La Virgen del Camino and the Air Traffic Control Squadron of the military airport of León, providing access to its restricted airspace. The Signal Theory department of the Gijón Polytechnic School of Engineering provided guidance on the topic of communications; even a teacher went to school and gave a talk to students about communications with mobile devices. The colleagues in charge of the Marumasat project in Galicia and Galasat in Andalusia helped and encouraged us at all times, sharing their experience and knowledge. See bellow the announcement art we created:

For the present school year, the design and launch of the Candasat II mission was planned, incorporating technical improvements and more complete sensor equipment. For this purpose, a group of teachers from different subjects, such as mathematics, physics, chemistry, physical education, arts, and technology, were actively working on the activity, framed in a STEAM project funded by the Ministry of Education with resources from the European Social Fund. Nevertheless, the new conditions derived from the sanitary emergency forced the experience to be postponed. But we will carry it on when possible and we are happy to share with you the past experiment.

Javier Redondas teaches technology, robotics, and ICT in the IES de Candás (Asturias, Spain). His passion is to increase the student’s motivation by using hands-on experiences and international collaborative projects. Javier is a Scientix ambassador.

Guadalupe Santos is a teacher of Physics and Chemistry at the Antonio García Bellido Secondary School in León. She is passionate about Science and its teaching. She loves her work in the classroom and tries to find new learning possibilities. She is a Scientix Ambassador.

Featured image is the author’s own – Attribution CC-BY

One Response to “Candasat I: a School Space Mission”