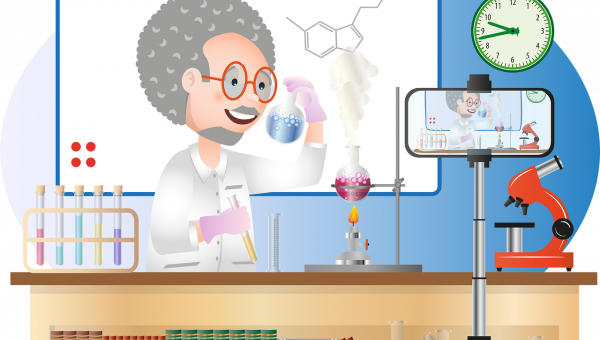 What is a Virtual Science Camp?

Virtual Science Camps are free online science lessons, open to anyone in the world.  Hosted by Michael Gregory in Paris, France, and joined by guest hosts from around the world.

Virtual Camps also provide the opportunity for students and teachers around the world to attend lectures and hands-on sessions led by some of the best scientists and educators in the world.

So far there have been three seasons of Virtual Science Camps:

Participants have joined from over 30 countries, and the list continues to grow!  The number and makeup vary widely from one camp to another, but on average there is roughly one-third of families from France, one-third of families from around the world, and one-third of teachers looking for new ideas for their own teaching.  A number of teachers have given feedback that participation in VSC inspired them to do more hands-on science with their students, especially with the shift to distance learning.

The particle physics series of camps brings together some of the best scientists and educators in the world, complemented by a unique blend of homemade experiments to support and enhance the guest lectures from CERN, JINR and the Perimeter Institute.

Tuesdays feature guest lectures from some amazing guest hosts around the world.  Saturdays feature hands-on sessions hosted by Michael Gregory or other teachers, including DIY experiments, games and inquiry activities. Often the experiments will be planned to support the topics covered in the guest lectures and to prepare younger participants to get the most out of the lectures.

Highlights include two new science shows recently developed by CERN’s S’Cool Lab, beta-testing a brand-new series of CERN Virtual Visits, lectures from scientists at CERN and the Joint Institute of Nuclear Research in Russia, and interactive sessions from guest teachers around the world, including Germany, Australia and the Perimeter Institute in Canada.

Virtual Science Camps was invited to test a new series of virtual visits being developed at CERN.

This gave participants an exclusive view of different particle physics facilities, and their feedback was useful for the CERN scientists and events team to improve their offer of virtual visits before opening offering them to the public.

Grab your favourite crayons, markers and pencils, and celebrate the end of Particle Physics for Kids Virtual Science Camps with a Colouring Contest featuring the ATLAS Experiment Colouring Book!

Participants up to 12 years old

Pick on page from the CERN ATLAS Experiment Colouring Book and colour it in!

Participants up to 16 years old

Colour and label the drawing of the CERN ATLAS Detector.

Prizes: Winners will have their submissions featured on ATLAS social media, and be invited to a meeting with a CERN scientist and virtual tour of the ATLAS Detector at CERN.

Particle Physics for Kids will come to a close with a final session, which will feature highlights from the past few months, a round-table Q&A with select guest hosts, and recommendations for resources to keep learning about particle physics.

Over the coming months, more exciting Virtual Science Camps will be added.  Here’s an overview of the upcoming camps:

Please join, and pass the invitation onto students and colleagues!

For up to date information and registration: https://tinyurl.com/VirtualScienceCamp

About the author: Michael Gregory is a Scientix Ambassador for France, coordinator of science programs for students of particular capacities at a bilingual school in Paris, and an active member of numerous teacher groups. In his spare time, he travels to give workshops to teachers and guest lessons at schools, always looking for more ideas to share forwards.  He has crossed over 30 countries by bicycle to connect with science educators and share ideas, many of which are shared on his YouTube channel. Once travel becomes easier again, he hopes to undertake another long bike trip, possibly from Paris to Ghana or Iran.