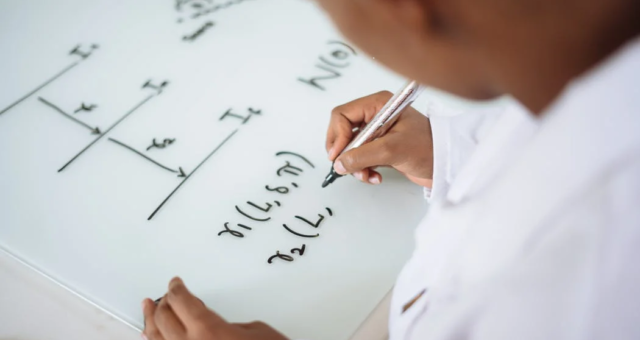 Our schools are data sources that few systematically use to improve teaching practice. Disciplinary difficulties in working with students or poorer results in tests are some of the many challenges we face in our work every day. Nevertheless, there’s a strategy that can help us overcome difficulties and provide teachers with the tools to face and solve these problems effectively: action research. Unlike traditional forms of research, teachers conduct this research to advance their own practice, in their classrooms, with their own students applying appropriate research methods. One such study was conducted to investigate whether gamification can improve students’ motivation to learn physics and problem-solving skills. The procedure and the conclusions drawn are described below.

Context of the research

The action research was conducted with 21 students in 10th grade, most of whom have a low academic achievement and a general lack of interest in learning natural science subjects.

The classroom was equipped with an interactive smartboard; students were allowed to carry mobile phones to school and use them in class for educational purposes. The physics cabinet was also equipped with the necessary equipment to perform various experiments.

Through this research, the aim was to examine whether a persistent change in teaching methods can improve students’ motivation for learning and, consequently, problem-solving skills. Gamification was chosen as the main learning method. Certainly, it cannot be applied independently without being intertwined with various other forms of learning such as group work or teamwork, inquiry-based learning, BYOD method, or similar.

Gamification is a method consisting of the implementation of game-like elements and processes in non-game contexts. That can be – for example – point scoring, badges, certificates, peer competition, teamwork, or a leaderboard to drive students’ engagement and enhance their problem-solving skills.

In physics students solved various problems by applying different strategies which mainly depended on the phase of the lesson or what we wanted students to achieve. Just as it is important to practice the application of physical laws in tasks and to develop procedural knowledge, it is important to develop higher cognitive levels by solving problems like finding solutions to open-ended questions about phenomena that students have not yet addressed during the class.

Considering the benefits of gamification in teaching and the importance of developing problem-solving skills in physics, the teaching was performed using different elements of gamification in the selected class. The students were awarded pluses (like points) or certificates for the successful completion of the activities. They were solving tasks or problems in groups or pairs. The group members changed each lesson so that the best students and those who collaborated with them in the group would not gain an unattainable advantage and discourage the other students. At the end of the research, the student with the most pluses received the highest grade.

In their virtual Google Classroom, a leaderboard was published so students could check their scores anytime. 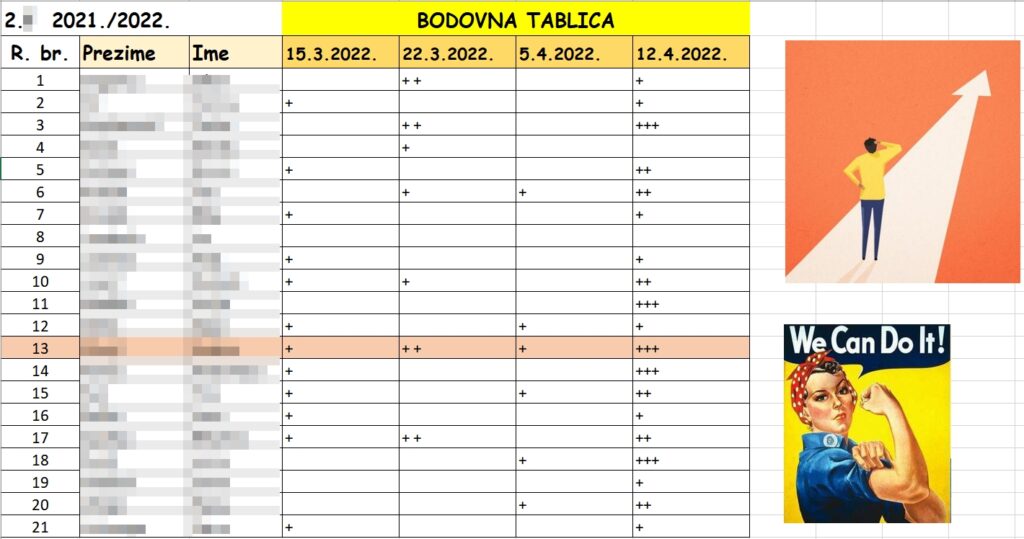 Numerical and experiment tasks and physics problems students needed to solve were given through QR codes or presented using digital tools like Phet simulation, Genially or Canva – designed like an Escape room game or a puzzle. 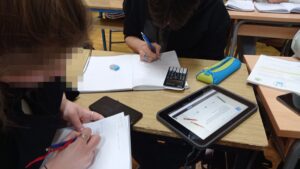 They used their mobile phones or school tablets for most of the activities. For peer-evaluation of group explanations, they used a rubric. During the active research period from March 15th until April 15th, the intervention was implemented in four lessons of 80 minutes. 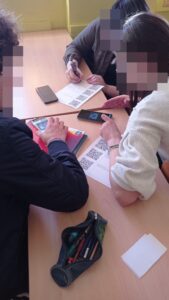 Since this action research explored the impact of gamification on students’ motivation and consequently students’ problem-solving skills, mixed data collection methods were used – both qualitative and quantitative. The reason for this is to gain objective and measurable data for comparison between them as well as with teachers’ observations and students’ claims and achievements.

During action research students were surveyed about each lesson activity, their motivation to complete activities, and what will motivate them to be more engaged in solving the tasks, via Google Forms. The teacher kept a diary with recorded observations collected during the lessons, students’ reactions, remarks, and comments on various activities and their achievements especially in solving the tasks. Students’ skills to solve problems and numerical tasks were assessed before and after the research and their achievement was compared with the results of another classroom where gamification wasn’t applied. The control group was a second 10th grade class of 23 students in which students generally have better performance. This comparison can give us some insights into students’ achievements and the efficiency of gamification, but it should be systematically and thoroughly assessed.

After the gamification elements were implemented in the first lessons, obtained students’ answers are shown in figure 4. Students chose to what extent they agreed with the statement, where 1 means “totally disagree”, and 5 stands for “totally agree”.

According to teachers’ observations, girls have shown more responsibility and motivation.

Answers after the second and third lessons were about the same as seen in figure 5 and figure 6. Their motivation dropped by 10% to 20%. But getting rewards (pluses) still had a great impact.

Students were very active in group discussion and interested in listening and evaluating other group answers, way more than in solving their tasks. Many of them commented that they liked the Escape room game. Students who usually have difficulties in solving tasks had them this time as well. 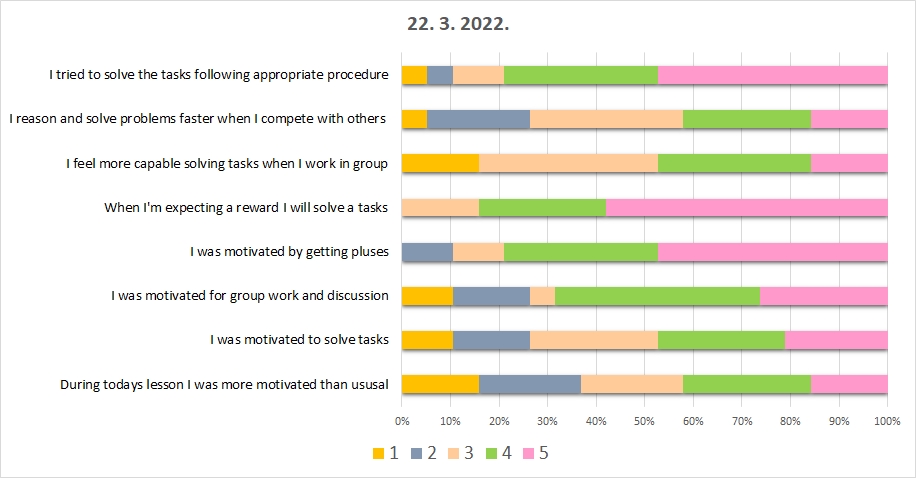 The third lesson (figure 6) with inquiry-based learning and gamification once again showed that two-thirds of students were motivated more than usual especially if they expected an external reward for solving a task. In the conversation, the students stated that they liked the experiments as much as getting the pluses. 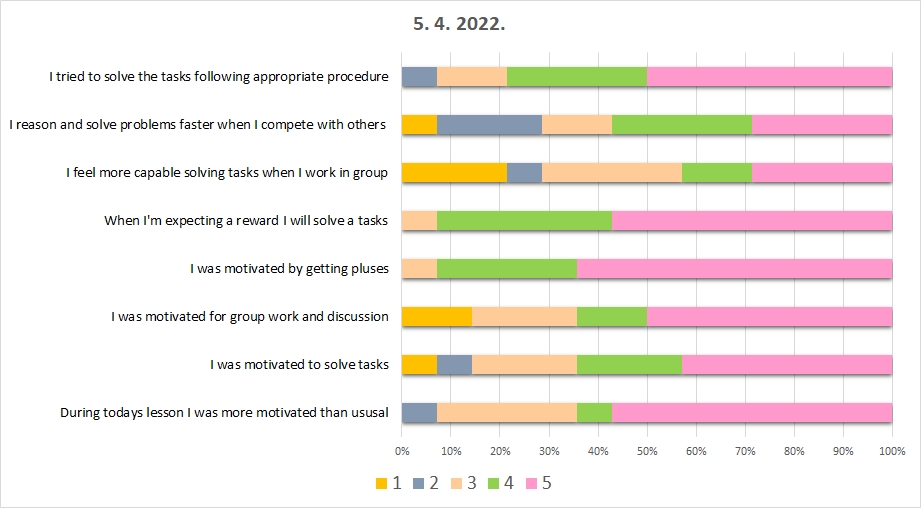 In the last lesson, all students were awarded pluses for completing any task. This decision removed the competition element which didn’t show any significance in students’ motivation which is confirmed by the similar distributions of students’ agreement on the claim ‘’I reason and solve problems faster when I compete with others’’. Consequently, this affected that all students reported motivation to solve a task as seen in figure 7. All students solved at least one task. 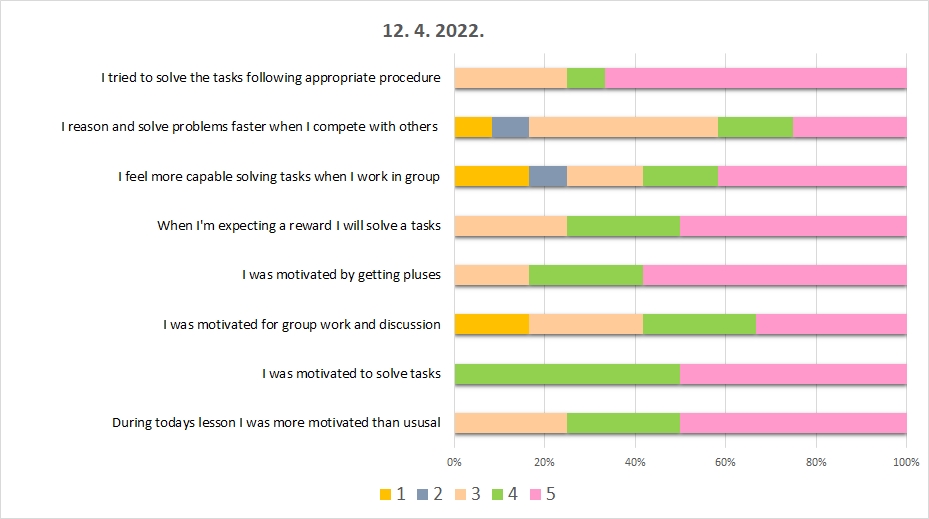 The following table 1 shows students’ achievement in assessment before and after gamification was implemented. Also, the table shows a comparison of achievement between two classes – the one we implemented gamification and the control group. The assessments considered the student’s ability to solve common physics tasks following the right procedure and apply physical laws to new problem situations. The higher the percentage, the higher students’ task-solving efficiency. As seen in table 1, both classes have slightly better achievements in post-research assessment. There is no indication that this method has contributed to more successful problem-solving in students.

Results and observations show that external awards like gaining pluses for completion of activities motivate students to be more engaged and active in lessons. A non-competitive atmosphere in the classroom encouraged the majority of the students to solve tasks at their own pace and according to their capabilities. But it was shown that gamification doesn’t affect students’ problem-solving skills since no improvement in task-solving was achieved as shown in table 1.

Since not all students are prone to group work or competition, it’s good to combine group and individual work more often during classes and allow students to perform activities for a reasonably long time to reach the outcome at their own pace. To avoid unwanted consequences such as student participation in activities just for points or rewards, it’d be good to score other activities, such as helping a group member solve a task.

Bojana Oreb is a physics teacher at Gimnazija Antuna Vrančića, secondary school in Šibenik, Croatia. She is a great fan of science who regularly organizes or participates in activities aimed at popularizing the STEM field among students in the STEM Discovery Week, Science Festival, World Space Week, EU Code Week and Little Scientists. She has been a Scientix Ambassador since 2021.

2 Responses to “Can gamification improve students’ motivation and problem-solving skills?”