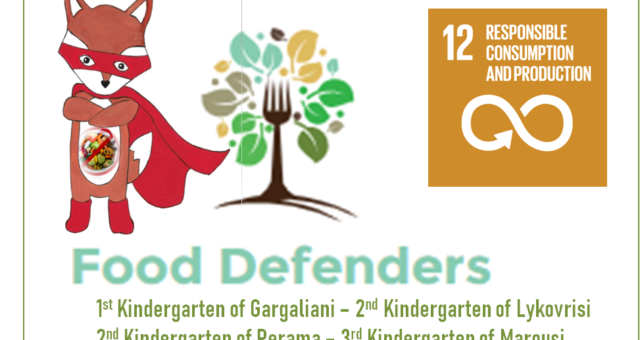 The project Food Defenders: Make the Waste to Worth the Taste, was designed and applied during the school year 2021-2022. In this project, four Kindergartens from Greece, nine teachers and 109 children participated. The mascot of the programme Foxie Planet invited students to adopt new attitudes towards food waste reduction. The accumulation of large amounts of waste in the classroom bin during lunch motivated children to search for solutions regarding the rational use of these resources and their recycling. The combination of environmental and STEAM education cultivates skills related to creativity, critical thinking, communication, and collaboration within an inquiry learning framework.

The project aims to raise awareness about food waste and engage students in a discussion to reduce overconsumption and build sustainable societies. Through this project, which is based on the 12th goal for sustainable development and lifestyle, students will develop their understanding of how food waste contributes to climate change. They will have an opportunity to identify potential problems or areas where an invention (composter) could help reduce the amount of food we waste. This activity engages students in STEAM methodology – Science (climate change), Technology (Edison robot programming, Makey-Makey), Εngineering (composter, board game), Art (recipe book, sustainable artwork), and Mathematics (measuring system to weigh leftovers).

A form on Google docs was created to collect data and figure out how much food was leftover (students were using measuring systems to weigh their leftovers and this led to some great learning about comparing weights). The findings led the students to seek solutions to combat food waste.

Before the start of the study – prior knowledge

Children were asked to express their thoughts about what “wasting food” is. Then teachers jotted the visual impression of the children, utilizing the thinking routine of visible thinking “I used to think … Now I think[1]“.

The problem of food waste was approached by weighing and recording the quantities of the food children did not consume at lunch. In an attempt to identify from which category of waste most of the garbage arose, they divided their records into 3 categories: organic waste, recyclables, and waste that ends up in the landfill. The children, carefully observing the results (Google docs) that arose through their active involvement in the experiential action, found that the same happened at home in larger quantities. Fruit and vegetable that were not “pretty” or were half-eaten as well as other leftovers in their lunch bowls often ended up in the trash. This finding sensitised the children to find ways to deal with the problem of food waste. The children proposed the following solutions:

The Food Defenders evaluated their knowledge of food waste reduction and the necessity of zero waste through game-based learning. This project used Escape Rooms to foster learning outcomes for students. Storytelling and narration were parts of the mission which the players tried to accomplish. Participants in the game transfer their knowledge into the game context and are lured into the story to solve particular problems and achieve zero waste by disclosing the hidden phrase.

Children had to collect only organic waste that people cannot consume (e.g. banana peel) and deposit them in the correct bin (brown bin) to get the clues (there were ten clues) to solve the final puzzle. Each letter of the alphabet had a symbol that stood for a letter (the hidden phrase was FOODY WASTY).

The 2nd mission – Crack the code

Mission 2 was a mix of a kinetic game with coding elements. Children had to follow the route, work together, carrying cards and matching them with the corresponding numbers according to the given match (number – picture) to solve the puzzler and get the clues.

The 3rd mission – Code through art

Five paintings of Magritte were selected (The Son of Man, 1946, The Listening Room, 1958, Apple Couple, Fine realities 1964, The Idea / L’idée). All teams played at the same time. They had to make their own board/puzzler and compare it with the other boards to figure out the common element. Through pixel art, they had to make their apple using caps to get the next clues.

The 4th mission – Just quiz it

Students had to solve a digital quiz (questions and answers were recorded) about the problem of food waste and how to reduce it. It was designed by the children of one of the partner schools, using Genially online tools. Each group had to answer 10 questions to get the clues.

This mission was divided into two parts. First, the children had to watch and listen to a message by creating a tangible interface circuit through Makey Makey Invention Kit. Then they had to put five pictures in a row. To match the pictures with the bananas, connect them with Makey Makey in Scratch to reveal the message and get the clues.

Students in the last mission had to train the Edison robot. In this collaborative activity, the robot had the role of the mayor of the city and for the needs of the game, he was Foody Wasty. Foody Wasty had to properly sort waste by placing it in the appropriate bins and stop throwing it all in the green bin. The teams explored, experimented and collaborated on each decision. They chose how they would guide Foody Wasty to the correct bin. The suggestions of the students of the collaborating kindergartens after their experiments were:

The routes were drawn on the floor/table with tape. Each group pre-decided how to guide the robot to the correct bin by clapping or using a remote control. Through this process, Foody Wasty became aware and adopted a new attitude towards the environmental issue of food waste, which increases our environmental footprint. 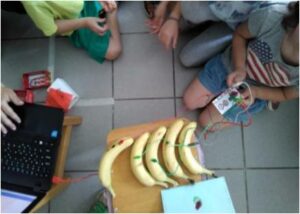 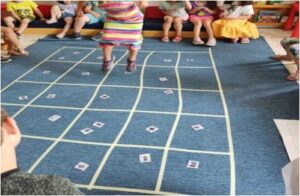 The educational activity focused on implementing an interdisciplinary approach based on STEAM education as it interacts with sustainable development goals and the broader philosophy of sustainable education. The children were allowed to cultivate skills related to creativity, critical thinking, collaboration, problem-solving, and communication. The children of the partner schools expressed their opinions and concerns about food waste, looked for solutions, and tried to change their attitudes. They gained new knowledge, cultivated skills, and adopted new attitudes towards the environment contributing to the reduction of food waste. They utilised technology and recognised its added value. They participated in a collaborative game Escape Rooms and became both designers and players of the game. In the end, children were asked the same question: What is “Food Waste,” and they were asked to recapture their thoughts visually. The recordings led us to the conclusion that the students did not simply understand the concept of food waste, but through the visual representation of the post-tests, we observed their awareness of the environmental issue of overconsumption that burdens the sustainability of our planet. By asking them to explain how and why their thinking has changed, they are allowed to develop their reasoning skills while developing active citizenship skills. Children are growing up in a world with multiple environmental problems. It is therefore essential that they are explicitly taught the skills of critical thinking and problem solving, effective communication, collaboration, as well as creativity and innovation, to make sure that they are well equipped to take initiative for a better world (Trilling & Fadel, 2009).

Angeliki Liapi is an early childhood educator in the 2nd Kindergarten of Lykovrisi and holds an MA degree in ICT in Education. She is a Scientix Ambassador since 2022.

Maria Tsapara is an early childhood educator in the 2nd Kindergarten of Perama and a PhD Candidate in the field of STEAM education at the University of Western Macedonia. She is a Scientix Ambassador and Leading Teacher for Greece since 2018.

Anthi Arkouli is an early childhood educator in the 3rd Kindergarten of Marousi. She holds an MA degree in ICT in Education and is a certified educator in STEAM/Robotics and an ICT trainer.